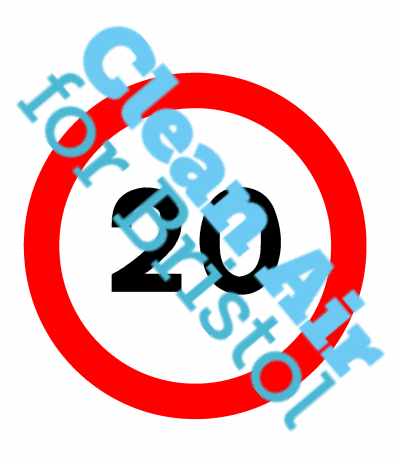 Bristol City Councils 20 mph review finishes today. In this consultation, the potential of 20 mph to help meet the National Air Quality Objectives (NAQOs) for NO2 and PM10 emissions, for which Bristol exceeds, has almost completely been ignored.

Instead, a Clean Air Zone (CAZ) has been proposed to tackle this as part of central governments Clean Air Framework. A CAZ would attempt to reduce air pollution by encouraging residents and businesses to purchase a cleaner car. A scrappage scheme has even been mooted as a way to kick-start this.

A CAZ might encourage some people to leave their car at home but it would have nowhere near the benefits of 20 mph limits.

One of the key infrastructure requirements for a CAZ is Auto Number Plate Recognition (ANPR) cameras. These are the same yellow cameras used along the M32 to enforce speed limits. They are one of the most effective measures for speed enforcement, ensuring drivers stick to the speed limits within the zone. Surely it would make sense to simply install these cameras to enforce the 20 mph speed limits that are already in place?

From Bristol Cycling’s perspective, 20 mph zones are only positive for Bristol. We recently highlighted the key benefits of 20 mph. In summary, 20 mph limits:

Over the past few weeks, Bristol Cycling has been campaigning hard to raise awareness of the 20 mph consultation. The criticism we hear time after time is that 20 mph isn’t enforced* and that “no one really travels at 20mph”. This isn’t a reason to scrap it, it is a reason to do it properly and see what the real benefits could be.

We’ve not heard anyone suggest the CAZ could be left to chance police patrols to enforce, so why has 20mph?

The Clean Air Plan Strategic outline case lists the following as possible risks from a CAZ:

A reduction in the number of diesel vehicles in favour of petrol vehicles could increase levels of carbon dioxide. In addition, the declaration of a charging zone or access restrictions may result in vehicles re-routing around the zone. This could increase fuel consumption and subsequently carbon emissions. Depending on the measures selected (a CAZ) could restrict access to the jobs or services within the same area.

There is potential to disproportionately penalise vulnerable groups in society, depending on the geographic location, scale and the structure of vehicle compliance standards.

*The criticism over 20mph enforcement shouldn’t be confused with its legality. Where signs are in place it is an offence for a driver to exceed 20 mph. Recently 20splenty.org published a statement from the Association of Chief Police Officers who have re-iterated the fact that 20mph speed limits are enforceable and where the limit is clearly marked (ie meeting signage regulations) then any offenders may be prosecuted. The police have also developed the option of speed awareness courses for those exceeding 24mph in a 20mph limit and these may be an option in some forces. Fixed Penalty Notices and prosecutions can also be used. In addition “light touch” enforcement can also be used which merely constitutes a reprimand/talk rather than anything more formal. In essence, they are enforced but very few resources are devoted to enforcing them.

One thought on “20 mph and the Clean Air Zone”