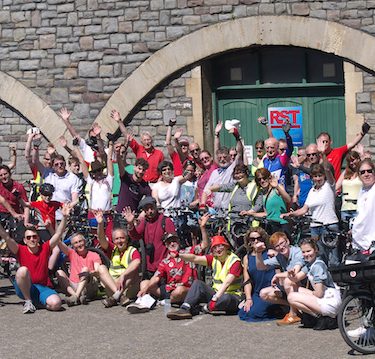 As with all campaigns, it’s easy to forget to take time to recognise what’s actually been achieved. In the past year a lot has happened, not the least of which is that our Space for Cycling campaign won the May elections!

At our September meetup and AGM on Weds 28th September we’ll be celebrating our successes and looking forward. Everyone is warmly welcomed.

This year our big campaign was around the May elections. We put forward three Space for Cycling manifestos, for Bristol Mayor, for councillors, and for the Police and Crime Commissioner. A special website was set up and hundreds of people helped get statements of support from all the main candidates for Mayor and PCC, and from 40% of council candidates.

Fully 64% of the elected councillors gave statements of support for Space for Cycling.  There were also statements from the elected Mayor, Marvin Rees, and PCC, Sue Mountstevens.

We decided to invest in paying a part time facilitator to support the volunteer activists. Jill Ford did a great job, in particular with our Facebook and Twitter presence.

Our weekly  rides, including the famous ‘Discover Bristol’ series, visited Birmingham and explored the local history of riots and chocolate.

We put in responses to many consultations, including the very significant ones on the spatial strategy of where to put 85,000 new homes, Temple Quay, South Gloucestershire cycle strategy, and the Filton Airfield among others.