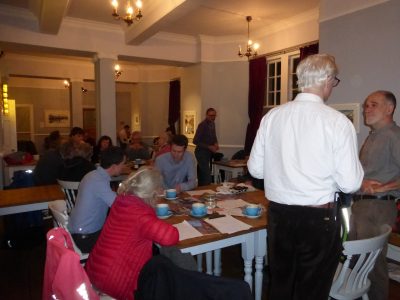 In planning for the evening, we had agreed to keep formal business brief, allowing more time for a Mingle we had promoted on social media and in member emails. The out-going Treasurer, Benn Woodward, took ByC members through the accounts. And we approved them.

The out-going Chair, Eric Booth, explained that the formal Committee is now dissolved and that any member who is actively involved is a de facto ‘committee member’. Group co-ordinators gave updates on Space for Cycling, Road Justice and Communications.

On behalf of BCyC, Space for Cycling co-ordinator, Nick Davies presented Eric with a copy of Carlton Reid’s Roads Were Not Built For Cars, to thank him for all he has done as Chair; Eric assured us he will continue doing things for BCyC!

Finally, Eric invited proposals for a new Chair, a new Treasurer and a new Secretary. Members proposed and seconded three candidates who were all elected unopposed:

Richard Williams has now stepped into the role of Space for Cycling co-ordinator. 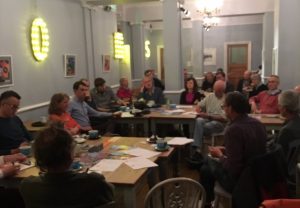 Some more coffee and cake and then around 30 people broke into groups to find out more about what BCyC does, to tell us what’s on their mind and even suggest new approaches.

Some people had come as interested visitors, not necessarily ‘cyclists’ but sharing our concerns. It was good to meet you all.

We were so happy with the venue we’re going back for the November monthly meeting:

We hope to see you there!