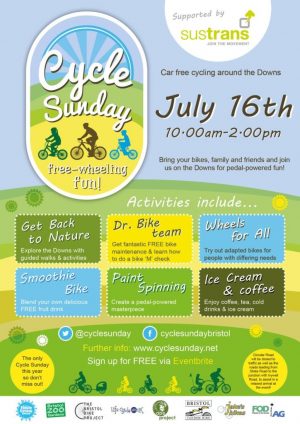 There’s a good number of excellent cycling events happening over the summer which we’re happy to support, and encourage everyone to get involved in.

Things kick off on Weds 12th July with a Let’s Make It Happen meeting in Roll for the Soul at 18.30. Just turn up, but it’s nice to know who’s coming so click the link if interested.

Then on Sunday 16th July it’s Cycle Sunday on the Downs, from 10am – 2pm.  This is the third year of this brilliant event that is part of a long term dream to make traffic-free cycling on The Downs a reality.

The next Peaceful Portway event will be on the 17th September 2017 2-6pm. As they say “Play, picnic, cycle, stroll or scoot on Portway, traffic free so you can enjoy a unique public space”.

These two events are the closest Bristol has to the massive global phenomenon that is Ciclovia. This started in Bogota and Medellin in Colombia where they shut off miles and miles of main city roads at certain points in the week, to give people a chance to get on their bikes/walk/rollerblade/run safely and calmly. These are amazing for both cyclists and pedestrians, they bring a real sense of community and peace to otherwise quite crowded and traffic filled areas, and put the power back in the hands of people who are using their feet and wheels to get around!

Ciclovia inspired the Bristol Cycle Festival back in 2010 and was a key inspiration behind ‘Make Sunday Special‘, one of previous Mayor George Ferguson’s pet projects. From it’s initial proposal it was progressively scaled back to just a few streets so blended into the range of festival and events that close of a few streets in the centre almost every weekend over the summer. As well as the long running Bristol’s Biggest Bike Ride, Make Sunday Special was mentioned when Bristol was named as the UK’s most active city.

We’d love to see a mass participation event like this in Bristol, but at the moment the Council shows little interest. Walking and cycling events are sponsorship led and corporate, like the ‘City Ride’ on 20th Aug, which used to be Bristol’s Biggest Bike ride.  This is the day after Bristol Grand Prix. We love cycle racing but it may not do much to encourage everyday cycling.

Here’s a couple of other excellent videos about Ciclovia-type open streets events: