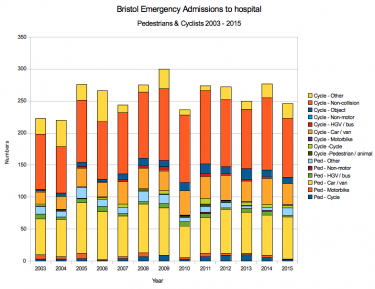 These are considered less reliable than hospital stat.s and known to seriously under-record the real number of incidents but, unlike the former, they do record incidents where the casualty suffered a more minor injury not requiring a stay in hospital.

What is very interesting is the work done by the Council’s Strategic Transport Department to compare cycling collision incidents with the distance cycled by Bristol residents [3].

Sounds like good news, but let’s not forget that a too many people are still killed or injured on Bristol’s roads every year and we’ve still a long way to go before we can claim to have safe roads.