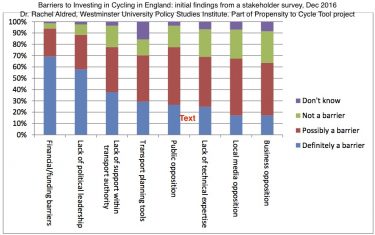 We contributed to a survey from Dr Rachel Aldred at Westminster University on Barriers to Investing in Cycling. The initial report has interesting, and disturbing, findings that will help focus campaigning objectives. Further work is being done by Rachel and her team. The Barriers survey is part of the DfT-funded Propensity to Cycle Tool project (www.pct.bike). The PCT is an open-source free online tool that contributes to the evidence base for cycle planning in England. It’s one of the resources highlighted on our Useful Information for Neighbourhood Campaigns

413 stakeholders (from a sample of 1,733) filled in an online survey on barriers to investing in cycling. The largest single group of respondents were officers (e.g. for local authorities or local enterprise partnerships), while others included consultants, academics, business stakeholders, and advocates. Respondents were based in, or had experience from, regions across England.

From a list of eight pre-defined barriers, the top three selected were financial/funding problems, followed by lack of political leadership, and lack of support within the transport authority. By contrast, public, media and business opposition were seen as less problematic. Many detailed examples were given of barriers and of attempts made (often unsuccessfully) to overcome them. Car culture/car dominance, within organisations and society at large, was the most common user- defined barrier, with other issues raised including bidding processes.

Respondents were asked about a series of possible enabling factors that could help (or had helped) overcome such barriers, and overwhelmingly choose either ring-fenced, long-term funding for cycling or high-level political support as their top enabler. Views on whether the situation was improving were mixed. Nearly half thought the situation was not changing or getting worse, while around a third thought it was getting easier to invest in cycling. People based in governmental organisations in London were over twice as likely to be optimistic as those based outside London. 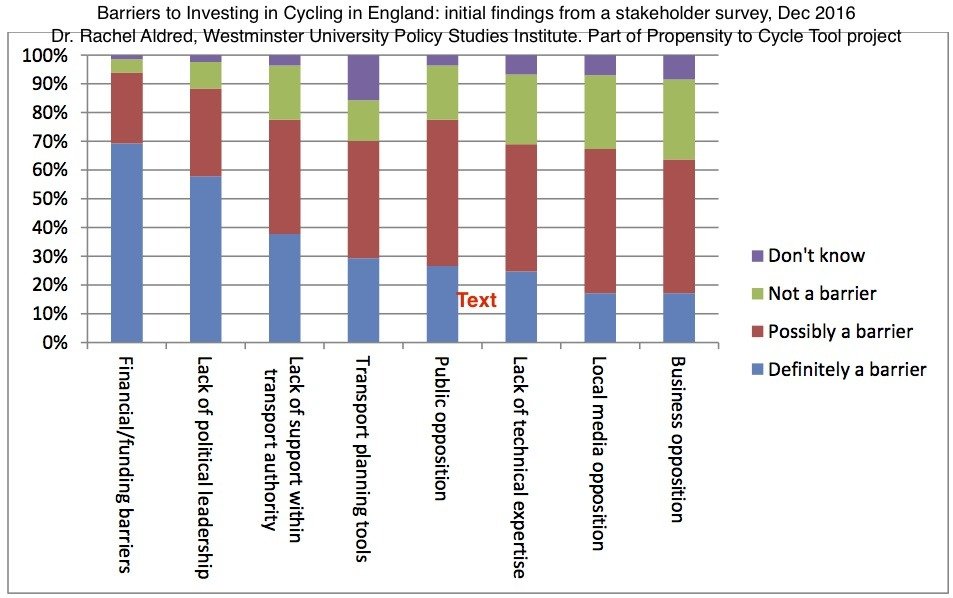 There is a useful table summarising examples of barriers of the eight barriers identified with a couple of examples given by participants. All of these can be recognised from the situation in Bristol, but we’re still in a much better place than most other cities in the UK, other than London.