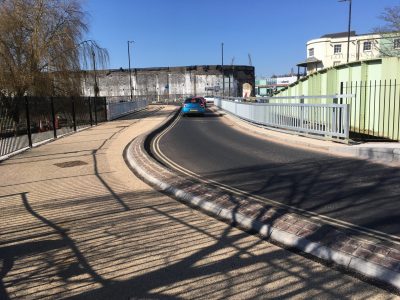 It’s always a delight to see new cycling infrastructure being installed across the city, but are our transport authorities getting it right?

A recent development has been the new bridge at Bathurst Basin and the path linking it to Bedminster Bridges along Commercial Road installed for the upcoming MetroBus. So we thought we’d review the current result and share this with you. Click here for a map to show the layout of the streets in this area.

Although the work itself has been performed to a high standard, it simply does not connect very well to anything else. In fact, without any improvements to the surrounding streets the new path is of limited use. If you access it from the dropped kerb opposite Bathurst Basin then you have a run of 100m before you lose priority re-joining the carriageway or stay on a narrow ‘shared’ path with multiple obstacles such as lampposts and trees. Shared use (with pedestrians) seems to have become the de facto Bristol standard and though appropriate in certain circumstances, it does not work alongside a busy road, such as here, where proper segregated provision would work better in avoiding conflict with people on bikes and on foot, enabling cycling at a reasonable speed.

The motor traffic westbound along the route is relatively low even at rush hour so as a consequence hardly any cyclists are using the path at the moment. The bigger obstacle is the awful Bedminster Bridges gyratory which is by far the most off-putting feature for less confident cyclists. However there is talk from the council to improve access around Bedminster Bridges, but we don’t have any detail yet.

The route might make more sense once the improvements to Wapping Road are made (if a segregated cycle path to feed into the Prince street one, currently authorised and awaiting construction, comes to fruition) but you’d still be losing priority crossing over Cumberland Road compared to staying on the main carriageway and using the new roundabout. We understand Bristol City Council is looking at this and we’re awaiting details – as always the devil is in the detail.

All that said the new works are still an improvement on the old situation where two lanes of traffic were squeezed onto the old bridge, creating dangerous situations for both vehicles and cyclists, but that’s more a result of widening the main carriageway with the extra bridge, rather than the existence of cycle/pedestrian path. This comes across as another example of cycling infrastructure fitted in as part of a bus scheme. It’s not a planned cycle route executed from where a rider might start to where they need to end up. 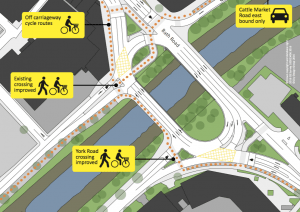 While there are some reasonably good segregated routes (Clarence Road, Baldwin Street, Prince Street) being constructed, none of them join up and the transport authorities do not seem to recognise that the most vulnerable point for cyclists is at junctions. None of the junction works they are doing are at all coherent. The solution seems to be to shunt cyclists onto the shared footway. This of course causes an additional manoeuvre back onto the road, or a slow and inconvenient route on the shared path which is delayed by additional crossings at lights which you wouldn’t have to wait for if you stay on the main carriageway. A prime example is works underway right now at the Bath Rd Bridge where on road cycle lanes are being removed as cyclist are directed onto a shared use pavement with multiple crossings.

In fact the whole Cumberland Road works have been a big missed opportunity. The road is quite wide all the way from Avon Crescent to Bathurst Basin and with any ambition could have accommodated some decent infrastructure that could feed directly into the proposed Wapping Road / Prince Street segregated route. They could have easily created a meaningful route from Ashton Gate to the Centre or, with more ambition, all the way from Long Ashton Park and Ride. Alternatively the old Chocolate Path could be repaired and brought up to an acceptable standard, providing a safe route for at least part of the way. At present the path is closed and our current understanding is that there is no money to renovate and reopen it any time soon.

There does appear to be a very piecemeal approach to cycle route planning, which we’re told is the result of piecemeal funding. This seems to us unlikely to deliver coherent, continuous cycle routes and as a result many people who would like to cycle in Bristol (see Sustrans’ Bike Life Report) will contain to consider it is too hazardous for them to do so.

Anyway, next time you ride around Bathurst Basin check out the new facilities and please let us know what you think, via the comments box below this article on the website, via our Facebook Page or via twitter. Also watch this space for news on Prince Street, Wapping Road and, more distantly, Bedminster Bridges.