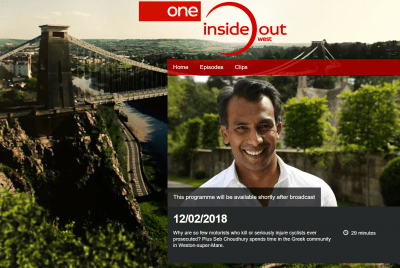 UPDATE: The programme is available on BBC iPlayer until mid March 2018.

BBC’s “Inside Out West” programme on Monday evening will be addressing the question of why so few motorists who kill or seriously injure cyclists are ever prosecuted. This reflects a chronic failure of the British justice system which Bristol Cycling and national cycling groups (such as Cycling UK, British Cycling, RoadPeace and Cyclenation) have been campaigning against for many years.

Only last week, Bristol Road Justice wrote to Avon & Somerset Police to challenge recent statistics which reveal A&SP’s reluctance to prosecute motorists who police officers’ reports suggest were at fault in injuring cyclists. For a sample of 12 incidents on the Gloucester Road, for example, A&SP took no further action in 8 cases.

Members of Bristol Cycling and RoadPeace have provided research and evidence to BBC journalists working on the creation of this programme, which is broadcast on Monday 12th. Feb 2018 at 7:30pm on BBC1 (typically channel 001) (but not on BBC1 HD channel 101). The report is also expected to be discussed on BBC TV’s “Points West” local news programme and on various radio shows.