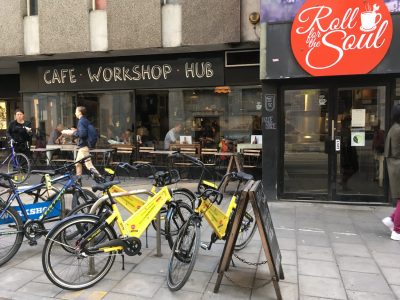 Note:  This is not our scheme! To report a problem or contact YoBike go to their website.

A new hire bike scheme is starting shortly in Bristol based on a ‘dockless’ model that’s been wildly successful in Asia. There’s a media photocall at 12.00pm on Tuesday, 9 May in Millennium Square where nine YoBikes will be available to trial and photograph, ahead of the delivery of 300 of the bikes across Bristol the same week.

The new scheme is a welcome addition to the thriving Bristol cycle culture, and it’s good news that Lifecycle are doing the maintenance. As we’ve discussed previously however, the evidence is that cycle hire schemes can only increase levels of cycling if there is clear political, policy and public support and complementary pro-cycling measures. It’s also clear that rather than substituting for car journeys, bike sharing is predominantly used instead of walking and public transport.

A new bicycle sharing scheme, YoBike, which offers an hour’s ride for just a pound has chosen Bristol as its European launchpad.

Unlike existing bike sharing schemes, YoBikes do not require a bike docking station so they can be picked up from and left in safe, legal and convenient locations.

The bike’s built-in digital technology links to a mobile app which gives cyclists the ability to instantly unlock any of the bikes, wherever they find them.

With similar business models immensely popular in Asia, YoBike is launching the first large scale bike sharing scheme of its kind in the UK.

Users can either pay per hour or rent a bike for 24 hours for £5. Regular cyclists can opt to buy an annual commuter pass for just £39, which entitles them to two, one-hour long rides per day.

The scheme will see 300 bikes delivered to Bristol in May, rising to more than 500 by the end of the month, as part of a comprehensive strategy, which will be rolled out across other cities in the UK.

YoBike is the brainchild of Chinese tech entrepreneur Bin Wang, who was named as one of China’s 30 under 30 entrepreneurs by Forbes magazine in 2013.

Bin worked closely with co-founder and YoBike UK CEO Michael Qian on the design of the bikes and development of the app over the past 15 months.

“Our fleet of bikes will help Bristol meet its target for becoming a greener city, combatting congestion and setting an inspiring example to other cities across the UK.

“YoBike wants to promote and facilitate safe cycling, which is affordable and convenient for people living and working in the city.

“Our bikes are easy to use, durable and good value and thanks to our app locking system, there is no need to install costly and obstructive bike docks all over the city. We’re very proud with what we’ve created in YoBike, we really hope Bristolians will love it.”

The YoBike has been designed and tested in accordance with the most stringent European safety standards. A number of security measures have been installed to detract thieves from targeting the bikes including location tracking, an alarm which goes off if the bikes are tampered with and custom made parts which will not be of much use to private bikes, thus tricky to sell.

“Anyone who steals these bikes will be disappointed,” said Michael.

“There’s really not much you can sell for use on other bikes and the bright yellow bikes themselves are so recognisable it would be very difficult to sell them on in one piece.”

The company has partnered with Life Cycle, a Bristol cycling charity to maintain the bikes. Following the initial launch phase, prisoners at the city’s HMP Bristol Prison will help assemble, maintain and repair them when necessary. Life Cycle trains prisoners in the mechanic skills needed to strip down, repair and rebuild bikes, with the aim of achieving City & Guilds accredited qualifications in Cycle Mechanics.

Michael said: “This is a fantastic Bristol-based initiative and a central part of our business model. “We really look forward to partnering with similar initiatives as we expand within the UK.”

The YoBike app can be downloaded for free from the Apple AppStore and Google Play. Users also benefit from a comprehensive in-App customer support service.

The company is working closely with the Data Science Institute, Imperial College London, to better understand how we can use our big data to improve riding experience. It is also working with Drayson Technologies to add CleanSpace environmental sensors to the YoBikes. Usage data will be shared with local government to assist with future resource planning and congestion initiatives.