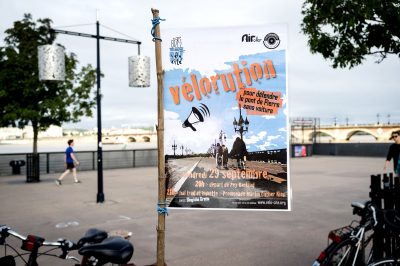 Last summer a major bridge in France was opened up solely for walking, cycling and public transport when Bristol’s twin city of Bordeaux bravely experimented with keeping private motor vehicles off the historic Pont Pierre.

A report by our sister organisation in Bordeaux, Vélo-cité (Bike-City) tells a story with parallels to our own Prince Street Bridge, which has just reopened this summer after a two year restoration. During this time access was limited to walking and cycling (albeit walking with bikes). Is there anything we can take from their experience?

(The original text in French can be found here).

On 5 September 2017 Vélo-cité staged a demonstration on the Pont Pierre, making a visionary speech “to show our support for a bridge that would be accessible only to bikes, pedestrians and public transport. Since 1 August, this bridge has been reserved experimentally to these three categories of users. This gave positive results and, for this reason, we ask for its continuation.

“Thirteen associations have joined together to sign a petition to request that the bridge be closed to car traffic, and over 1600 of you have signed: pedestrians, cyclists, joggers, skateboarders, rollerbladers and even car drivers.

“This is a historic opportunity for the city of Bordeaux, as was the case a few years ago with the repurposing of the quayside and the construction of the tram.

“Today, who could imagine Bordeaux without the tram or the conviviality of the quayside? For the Pont Pierre it will be the same  – soon people will be asking ‘Really? There used to be cars on the bridge?’

“The bridge was, and is, one of the symbols of Bordeaux. Closing it to car traffic will make it into a symbol of the Bordeaux of tomorrow.

“It is up to us to support this choice, so that Bordeaux can continue to be synonymous with quality of life, savoir-faire and savoir-vivre, which will be an example for other towns both nationally and internationally. This decision is already being followed with close attention in France, Europe and beyond.

“The Pont Pierre without cars has, and will have, a positive effect on the city. Of course, it may cause some problems for traffic circulation at first, just as the tram did, but today the positive economic, social, lifestyle, air quality and health effects are tangible.

“Numerous witnesses told us in August that the Bridge not only retained its existing users but also gained new ones who started to cross regularly, and with pleasure, between the two banks of the river.

“A new clientele of tourists and inhabitants is starting to use the bridge. This is an opportunity of economic and social development. Each pedestrian and cyclist who crosses the Bridge is a potential client for the shops on both sides of the river.

“The urban area of Bordeaux is developing rapidly: the population is growing, creating problems of pollution and traffic congestion. We have to accept that the age of private car ownership for all is over, and at the same time make life easier for those who have no choice but to take the car.

“We are sensitive to this issue and we do not accept the stereotypical view that city cyclists are in support of closing the bridge to car traffic while surburban car drivers simply have to accept it.

“On the contrary, cyclists and car drivers have a common interest and a common objective: to encourage all those who can take public transport, walk or cycle to do so. Of all journeys, 75% under 3km are made by car. It is possible, and desirable, for everyone to change these habits!

“Our common struggle is the development of a more peaceful and sustainable city. Liveable, breathable, accessible to all. By taking ambitious decisions, Bordeaux can become a model with far-reaching influence.”

The Sud Ouest newspaper also carried a short report on the bridge experiment, as translated here:

“Since the beginning of August, the experimental closure has shown that limiting use of the bridge has not negatively affected traffic flow either upstream or downstream of the bridge.

“Over 90,000 cyclists were counted between August 1st and 15th, which could represent almost 400,000 crossings over the two months of the experiment.

“At the height of summer, the city council considers the overall effect to be positive.

“Two weeks after the start of the experimental limitation of the Stone Bridge traffic to pedestrians, cyclists and public transport, Bordeaux Metropole [the city council] has announced that the results are mainly positive, even though it will be necessary to wait until September to have sufficient data to judge the effect of the experiment on traffic flow.”

So we await the results with eager anticipation and hope we can see Bristol apply some of this thinking and ambition to achieve the plainly obvious. Lets keep our humble Prince Street Bridge open to active Travel. Let it make its contribution to Bristol as part of a world-class and tourist-friendly (as well as resident-friendly) city.