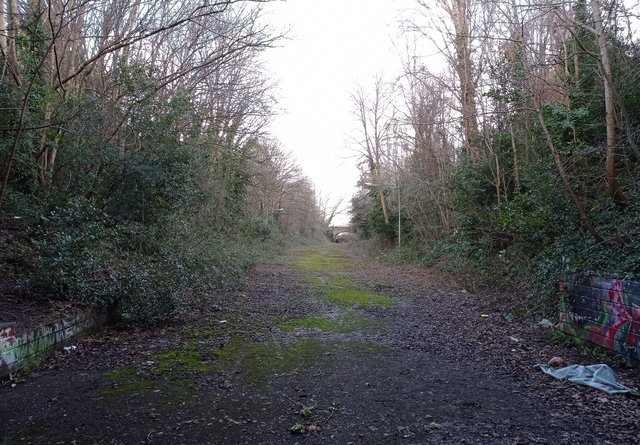 Bristol Cycling Campaign is supporting two temporary planning applications that could get a pedestrian and cycle path on the old Bristol and North Somerset railway line, (the Brislington Greenway), at least for three years. This comes as there also reports that Bristol City Council has advanced proposals to turn it into a road (Plans are back for A4 relief road along former railway line in Brislington)

We believe that this section of land would create an attractive traffic-free green active travel corridor connecting existing shared path routes of The Whitchurch Way & The River Avon Path at St Phillips. The current route to make this connection is mostly on road, convoluted and requires crossing the busy A4, discouraging families, less confident cyclists, and the users of adapted cycles from using this route. This would make the Whitchurch Way much more accessible to users from across the City, even if this is only on a temporary basis, whilst Bristol City Council are building it’s more extensive network of walking & cycling routes in the area, as described in the adopted West of England Combined Authority Local Cycling & Walking Infrastructure Plan (WECA LCWIP) & in the region’s strategic transport corridor plans.

As Bristol Council’s own data shows cycling & activity levels are below the Bristol average for South Bristol, which is documented to result in worse physical & mental health outcomes. The busy & hostile road environment in this area discourages active travel. However, by establishing a connected traffic free travel corridor on this land, it will create a conducive environment for people of all ages & abilities to feel more comfortable to increase their walking & cycling activity levels that can start soon, rather than waiting for wider developments.

Whilst we understand and concur with the Police view expressed to the planning committee that there is a risk to the social safety of path users, due to the lack of passive, natural surveillance afforded by active frontages along the route (mitigated to some degree by the proposal for business & commercial units beside the path – described in application 21/03498/F) and the lack of potential guardians at quiet times of day and especially at night. However, given that there is a recognition of this risk, then rather than deciding not to open the path, there should instead be a commitment to a strategy to mitigate the risk on this route, and all other traffic free routes in our area, including the Bristol to Bath Railway Path. Failure to open the path will mean that the physical & mental health benefits that the path will offer to users will be lost and is rather like saying that there is a road that is exposed to carjacking risk, so rather than address the carjacking, we will close the road.

We would contest the assertion made to the committee that the “challenging topography” between Bristol and Whitchurch, Keynsham and Bath and the distances involved diminish the relevance of cycling in this area, either on this route or others that will be developed in the area. The meteoric rise of e-bike adoption across Bristol, both privately owned and now also available on a pay-to-use shared basis, means that longer distances are accessible to more cyclists, as well as removing the challenges of a hilly terrain for those who are discouraged by this.

We would point to the fact that this application is for temporary permission for a 3-year period, as such it does not exclude all future transport provision. Further that a multi-modal solution (including public transport) could not be physically achieved on this route in a 3 year timeframe. However, these 3 year’s present a window of opportunity on Bristol’s path to Net Zero. The active travel corridor could be quickly opened with goodwill from all parties and its potential to deliver physical & mental health benefits to the people living nearby and across the City could be realised.

Finally, at this time we believe that it is your responsibility to prioritise today’s emergency issues, those being the health of the citizens of Bristol and the global environment – both of which would be aided, even on a short-term basis, by the opening of this traffic-free active travel corridor, rather than rejecting this application and continuing to leave this land to lie wasted & redundant and the opportunity missed.