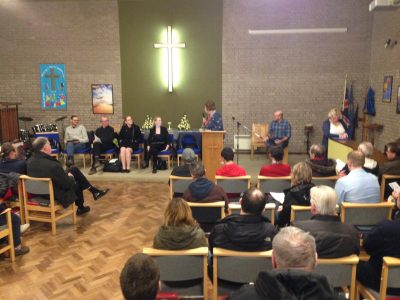 A number of BCyC members attended a public meeting on Tuesday 30 January 2018 to promote the Brislington Greenway. This is the old Brislington Railway line, which runs from Sainsburys on Whitby Road to Tesco on Callington Road (see Railway path, not relief road and Old Brislington Railway – Relief Road or Green Haven?). Local residents think it would be a great idea to turn it into a cycle route! They’ve shot a video illustrating this:

The meeting was addressed by two Bristol Cabinet Members, Cllrs Nicola Beech and Mhairi Threlfall, responsible for Place and Transport respectively. It was unclear exactly what they were proposing but Bristol City Council and the West of England Combined Authority want to use the old rail line for the Callington Relief Road, a bad old fashioned polluting and congesting motor road. This is design for the late Twentieth Century not the mid Twenty-First!

Rupert Crosbee of Sustrans spoke in favour of the Greenway as did our Space4Cycling Officer, Nick Davies. Almost all speakers in the Hall supported them and all the applause was for this view. The evidence is that a road would make congestion worse as it would “induce demand” for people to use drive more (see Induced Traffic and Traffic Evaporation).

Cllr Beech commended our aspirations but considered them unrealistic. She appeared to consider the road was a “done deal”. We doubt that. There has been no consultation as that is not a statutory requirement for a road scheme. But it is considered best practice and generally advised. https://www.ice.org.uk/knowledge-and-resources/briefing-sheet/road-improvement-scheme-consultation-good-practice

We would be very surprised if the Council risk not consulting, increasing the prospect of a judicial review. This administration or a subsequent one, or WECA, could change their minds. The homes (presently quiet and adjoining a greenspace) of some local residents are yards from the new road. Good luck to them in opposing it. If you support them please sign their petition: https://brislingtonrailwaypath.weebly.com/