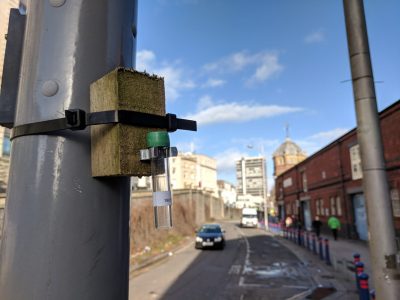 However, we are concerned the expected reductions in NO2 are small would not reach compliance for another decade. It is also concerning that CO2 emissions might increase due to the switch from more efficient diesel vehicles to petrol (outlined in Section 3.6 (page 15) of the Economic report).

We think there are better ways to address the transport and air pollution issues our city has faced for so many years. Top of that list is to follow London (and potentially Manchester) in implementing a city wide cycle “superhighway” network. Analysis of NO2 monitoring sites in Central London along this route have shown sharp reductions in roadside concentrations of the gas. This was not after people had decided to start using the network, it happened practically overnight as soon as road space was taken away from motor traffic. This is a well known concept called “traffic evaporation”. Building a cycle network along every A-Road in Bristol is estimated to cost £111million based on government figures of cycle schemes around the country. Covering the area the larger CAZ, would be around half this size and put it at a similar price to the CAZ. This would be transformational for Bristol. Manchester is aiming to design a cycle network suitable for a child as young as 12 to be able to cycle on by themselves.

Another option is for Bristol to extend the 20mph scheme to all city centre roads, but most importantly to enforce them using the ANPR cameras that are proposed for the CAZ. A study that modelled pollutant concentrations from such a scheme, using advanced modelling software not used in the CAZ study, found that if drivers were made to stick to 20mph, the drop in roadside NO2 concentrations could be as high as 60%.

Both the later two schemes would have the added advantage of improving the quality of life in Bristol through creating more space for people to actively travel and 20mph improving driver behaviour and reducing the huge number of collisions that happen every year.

We’ve put together an infographic summarising how we see the options available to the Council. In short a CAZ does not appear to be the fastest route to compliance. Please visit the consultation here and give your views: https://bristol.citizenspace.com/growth-regeneration/traffic-clean-air-zone/. Bristol Council have a useful website setting out the issues and their position at https://www.cleanairforbristol.org.

A pdf of this infographic can be downloaded here