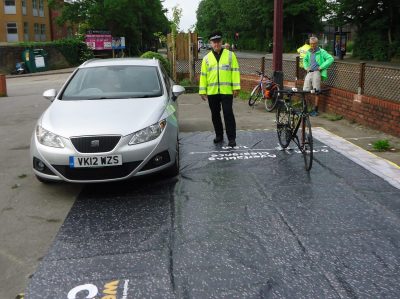 The Bristol Road Justice Group met senior Avon and Somerset Police officers at the beginning of June to discuss ongoing concerns as to police road traffic law enforcement and other work to reduce the dangers posed to cyclists by dangerous driving. The meeting was timely following the publication last month of the detailed report ‘Our Lawless Roads‘ from the national road victims’ charity RoadPeace, which reports an alarming drop in traffic law enforcement and in traffic policing numbers (a 60% reduction in Avon and Somerset from 157 to 62 officers). Here’s the view of Cycling UK on this important report.

The Group met Chief Inspector Kevan Rowlands, Acting Head of Road Safety, and amongst the issues we discussed were:

In all, a useful and constructive meeting. Disappointment at the police’s reluctance to prosecute dangerous drivers alongside other measures, but good to see that at last they seem to be developing much better systems to identify the location and types of bad driving and are committed to direct their resources accordingly.