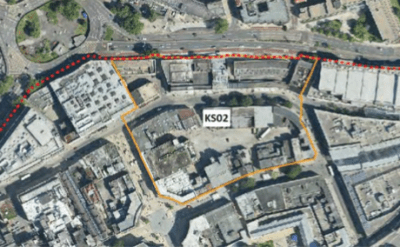 ‘Callowhill Court’ is the name given to a huge redevelopment of a large part of Broadmead, including changes to traffic and bus routes in the whole area. We’ve been paying close attention since the initial proposals in December 2016, and there have been significant changes, however as members and strong supporters of Living Heart for Bristol, we are very much in agreement with the points they raised 1000 Space New Car Park and 4-Lane Road in Bristol City Centre Would be Madness! Many of these issues remain despite the revised plans of July 2017 reducing parking to 500, with improvements to cycle routes and permeability and 670 cycle parking spaces. There’s even a new route proposed from Gloucester Road to Broadmead avoiding St James Barton roundabout and two small ‘cycle hubs’ one on the corner of Lower Castle Street, the other on the NE corner of the new development.

Despite some promising changes there’s only going to be one chance to get this right, and overall we still feel the proposals will be negative for cycling.  Here’s our full response and the pdf version BCyC Response Callowhill Court Aug17 FINAL-4

Our position on this planning application is: OBJECT

Bristol Cycling Campaign believes that everyone deserves safe, attractive space for cycling on all Bristol’s streets. We welcome the target in the council’s Bristol Cycle Strategy for 20% of trips to work by bike by 2020. We are concerned that the proposals in this consultation will discourage cycling.

Our general assessment of the proposals on this consultation drawing is that they:

We are particularly concerned by the closure of Horsefair to cycling, the disconnected cycle routes in a number of places and dangerous cycle lane designs near bus stops. Horsefair is the natural through and access route for cycles and cannot be replaced by a poorly designed pavement cycle path on Bond Street. The proposal to do so shows a lack of understanding of the design principles for car free public spaces with free cycle and foot access, as is normal on the continent.

The proposal to provide cycle parking at the periphery is part of this lack of understanding. Short term shopper cycle parking needs to be distributed among the shops.

Bristol Cycling Campaign has the following specific comments on the revised proposals, in addition to those raised in our January 2017 response. The development is bad for cycling and contravenes local plan policy in the following respects:

One thought on “Callowhill Court – large development, carpark and change to routes around Broadmead – our response”