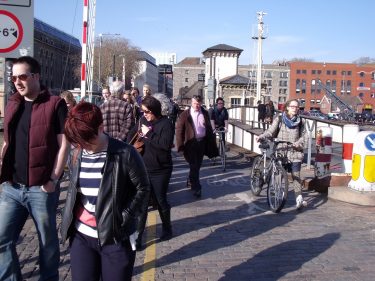 Prince Street Bridge is possible the most important single point in the city for walking and cycling. It is very heavily used and already a point of significant congestion. This will get worse as ever more people choose to walk and cycle.

It is clear that it can no longer continue to function safely and comfortably while meeting the needs of walking, cycling and motor traffic. Something has to give.

We’ve launched a petition for a one year trial of a proper design for walking and cycling. It’s been closed to motor traffic for six months so we know the city can cope.

There is a consultation on Prince Street out now to create a proper All Ages and Abilities (Triple A) route from Cumberland Road to the Centre, but it gives up at Prince St Bridge (and also doesn’t link to Gaol Ferry Bridge).

There’s a ‘plotting’ meeting for everyone who wants to make this happen on Weds 20th July, 5.45pm at Roll for the Soul. Come along!

Here’s the text of the petition

As Prince Street Bridge is one of the very few direct and flat routes across the floating harbour it is important to use this route as best possible. As well as making the route safer for walking and cycling, it could also be used to improve the public space by creating public plazas at either end.

It is important to create cycle routes that are for everyone, not just those who already cycle frequently. With 18% of Bristolians already cycling regularly, and 51% willing to cycle more, there is a big demand for what both groups want to see more of: safe, direct, and traffic-free routes. [1]

The layout on Prince Street Bridge at present is difficult and confusing. The space assigned to healthy and active travel is too small, leading to conflict. People cycling may choose to use the motor traffic lane, however this too is fraught with conflict as people cycling have no official way to switch from one side of the road to the other. This space should be redesigned to be safe and convenient for everyone of all ages and abilities to walk and cycle. This means eliminating the major source of danger, motor vehicles, and providing clearly delineated space for cycling that is separate from walking.

More safe space is needed for cycling and walking to encourage and support those who want to use active travel. Increasing active travel is beneficial for the following reasons:

+ Reducing congestion, as a majority of Bristolians would cycle more given safe, direct, and motor-traffic-free routes, this would mean motor vehicles on the road, which will improve travel times for everyone.

+ Improving health services for Bristol, as active travel has a host of health benefits.

+ Reducing the deadly levels of pollution delivered directly to streets by motor traffic.

We would like to see the council implement an experimental traffic regulation order for at least one year, to test this proposal. We would like this to be tested on whether pollution levels on Prince Street Bridge have improved, and on public engagement by polling to find out if people walking and cycling feel safer. If successful the scheme must continue. [3]

We will leave the council to design the specifics, however cycling and walking must be clearly delineated to avoid conflict. Ambiguous shared space is absolutely not supported. We would not like to see access blocked for emergency use, which could be implemented, for example, with the placement of ‘crashable’ flexible bollards that can be removed or driven over in emergencies.

[3] Note that the current works on Prince Street Bridge have shown that motor traffic can be diverted, but network improvements would not be expected to appeared as the route is distinctly more inconvenient for active travel.