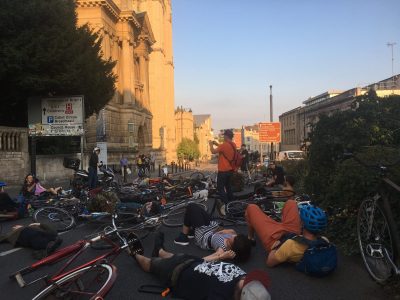 On the last Friday of every month there’s an an “organized coincidence” ride around central Bristol, with no leadership or membership. It’s one of the worldwide Critical Mass events. These rides have been happening in Bristol, on and off, since 4th Feb 1994 as reported in issue 11 of our membership magazine, with another report from 1997 in issue 25, as below).

Currently the rides are going strong, supported by an active Facebook group. The next one is on Sept 28th at the usual place and time of 6pm for 6.30 on College Green.

The August 2018 ride included a ‘die in’ on Park Row by the Wills Building where a cyclist had been seriously injured earlier in the week.

Participants have insisted that these events should be viewed as “celebrations” and spontaneous gatherings, and not as protests or organized demonstrations, with routes decided spontaneously by whoever is currently at the front of the ride. The moto is ‘We do not block the traffic, we are the traffic.’ 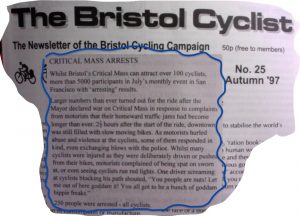 There’s an interesting spin off focussed on the issue of children and cycling called ‘Kidical Mass’ with our very own group in Bristol.

Comedian and activist Mark Thomas has talked about the feeling of liberty on a city street flooded with bicycles in this video from 20 August 2018. “My activism: taking to the streets on my bicycle”