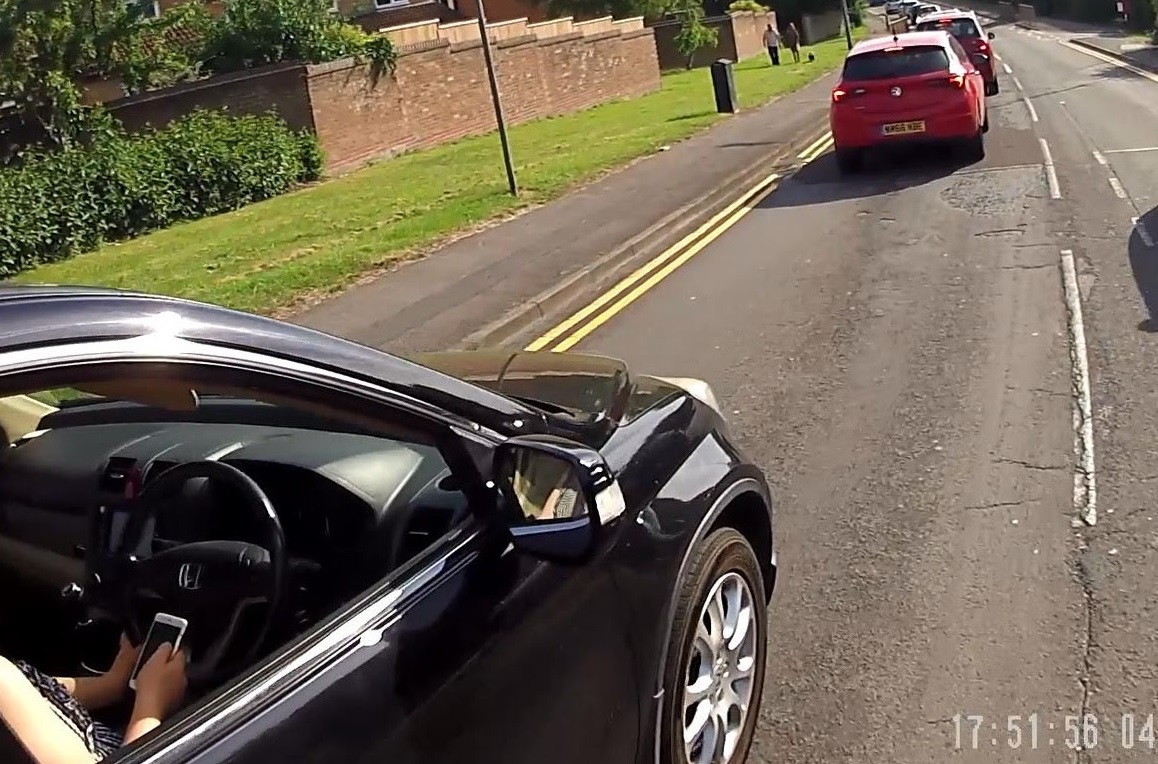 BCyC member James Taylor writes: I’d like to acknowledge and thank Damien Devanny (Continuous Improvement Officer for Road Safety), Avon & Somerset Police (ASP) and others at ASP’s Road Safety Unit for their assistance and encouragement with this article.

I’m often asked about this aspect of cycling, so I thought it might be useful to get some words down about it.

Having cameras on my bike has enabled me to report over 230 drivers to the police since November 2018, 225 of which were contacted by the police with a warning, fixed penalty/offer of an education course, or prosecution.

It’s helped me to mentally process those drivers who put me in danger, as I know there’s a chance they’ll be held accountable, and are more likely to improve their driving around vulnerable road users. It’s far better, I find, than inwardly cursing their selfishness and impatience before carrying on without anything being able to be done about their dangerous driving. I’ve come to regard reporting dangerous driving as a pro-active way to make my local roads safer, and take every opportunity to have a dangerous driver warned or prosecuted.

Why I decided to have a camera on my bike

I typically cycle ten miles to work and six miles home. I extended my commute to get more exercise and to enjoy the country lanes between home and office, rather than taking the busy commuter road route. I found, however, that there was the occasional really scary and dangerous close pass.

I wondered what would happen if I was injured – asking myself how I would bring a claim for injury if I couldn’t work or cycle any more. Or in the worst case, how my family would know what had happened to me.

After attaching my first camera in 2016, I soon experienced a very nasty fast close pass. I made a complaint to the police online, and two officers actually came to see me, took a copy of the footage and visited the driver. They said she was horrified by the footage, hadn’t noticed the incident, that her husband was a ‘keen cyclist’ and that she resolved to drive better in future. I was happy with this outcome, but it was highly labour-intensive for the Police.

On another occasion, a driver overtook me around a blind bend, known as an accident blackspot (Perrinpit Road). The local PC with whom I shared the footage, who has probably attended various collisions at this place visited the driver. The effect on her driving was immediate. I’m regularly overtaken safely and carefully by the same driver many years later.

In 2019, I regretted not having a dashcam in the family car when I had a collision with an uninsured driver on a country lane, where it was my word against his as to who had caused the crash. So maybe cyclists will decide to have cameras for the same reasons some drivers have them.

Having the cameras in case I get smashed up is OK, but I came to realise that I could do my little bit to help the Police educate or prosecute dangerous drivers. Prevention is better than cure, after all. Failing to report a dangerous driver is a wasted opportunity to make my local roads safer. The police process has been streamlined and I now find it quite easy to use.

I’m chiefly motivated by self-interest – a minority of drivers are driving without due care and attention on the same roads my friends, family and I cycle on, and I have the opportunity to try to mitigate the risk they pose to us by reporting their behaviour or in some cases by speaking to them.

If someone breaks their phone habit and puts it down, or finds some patience to wait for a safe overtake then that’s one safer driver around me and my loved ones (as well as the rest of my community).

If they tell their chums that some sneaky cyclist grassed them up whilst they were checking Instagram, or because they passed him too close because of the oncoming traffic, then their chums might be more careful as well. One report can have a ripple effect.

This incident happened quite close to where I live, because a driver was using a mobile phone and not paying proper attention. My friend remembers attending as a firefighter and having to cut the drivers out of their vehicles. There but for the grace of God…Iain said:

To know that all of this could have been avoided if the driver of the other car hadn’t been distracted is just heartbreaking.

I’m fortunate that I’ve not been personally involved in a collision on my bike, but I’m under no illusions that it is a possibility.

The growth of dashcam and the willingness of the public to submit footage is potentially the single biggest game changer in improving safety on our roads for a long time. Whether it’s the driver changing how they drive having installed a camera or the understanding that any other road user can upload footage of inconsiderate or dangerous driving it is and will continue to influence driver behaviour.

As cyclists, we are among the group of road users most likely to be adversely affected by dangerous driving – but we’re also very well placed to play a part in tackling it. Addressing the minority who drive badly either by carelessness or habit brings road safety benefits to the whole community, whatever their chosen mode of transport.