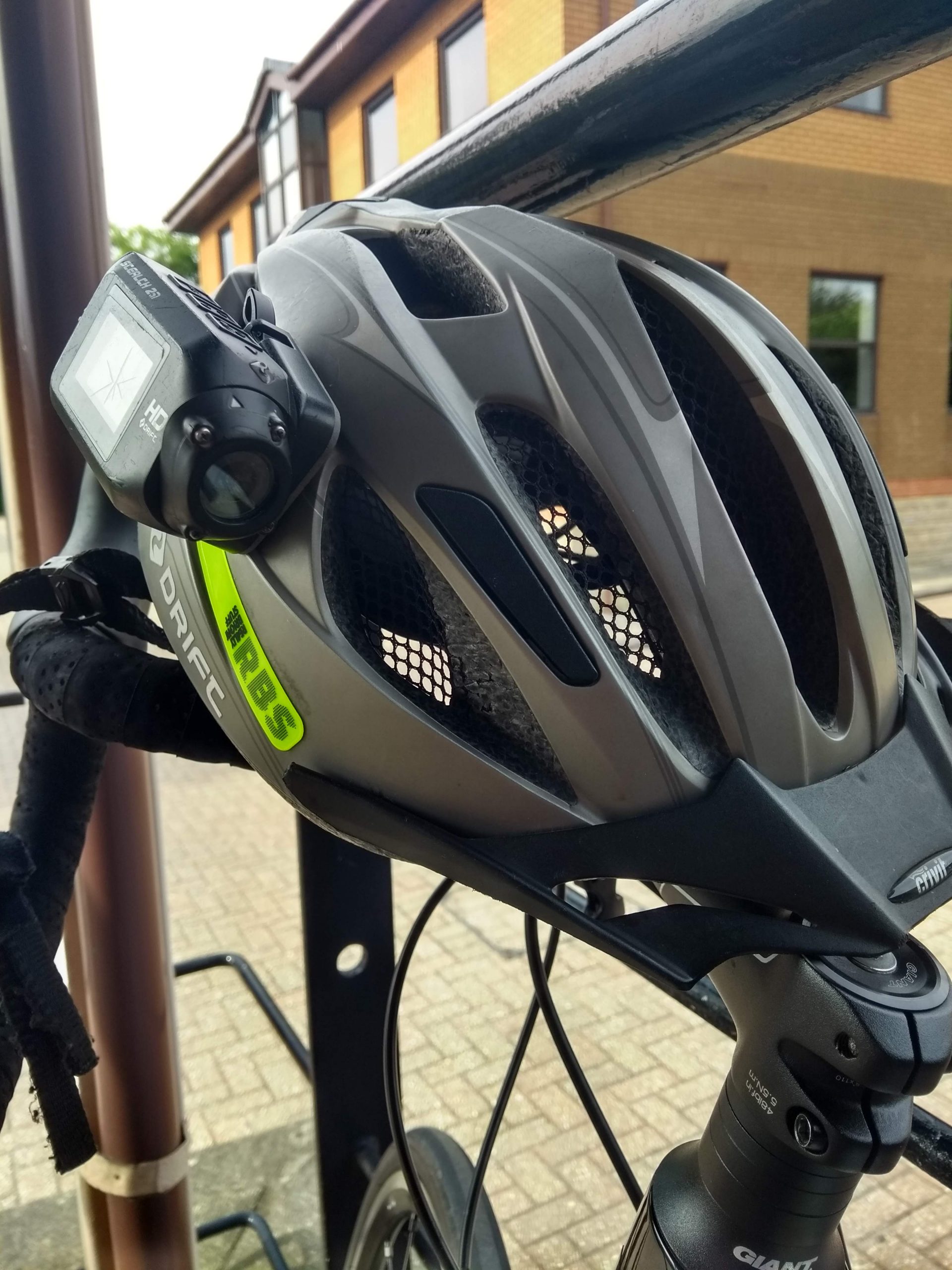 This is part three in our three-part series on cycling with video cameras. Catch up on part 1 at Reporting and part 2 at How to report and what happens next.

What cameras are out there, how do they attach to the bike, how expensive is it to have one?

When it comes to action cameras suitable for cycling, there’s a huge choice available. A serviceable camera can cost from £50-£500 or more.

Factors to consider include:

And factor in the cost of a fast memory card – anything from £10 upwards.

Only a helmet camera will record what you see as you turn your head. This can be useful for reporting mobile phone use, for example, or a face to face altercation with another person. The bar-mounted camera will be good for close passes but best for when you just want to keep a nice film of a particularly enjoyable ride. The footage will usually be smoother.

Some cameras have image stabilisation, others don’t. If you’re looking to make films for their beauty rather than just for road safety reports, this will be more important.

Battery life is an important consideration, as is the size of the memory card.

My rear camera, which is also a multimode rear light, records five-minute chunks which can take up 600mb each, so a 32GB card holds about 50 x 5 minutes or just over four hours of footage, which is more or less the battery life of the camera. It overwrites the oldest clips on the card when it fills up so I don’t have to worry about deleting footage to make space.

My Drift Ghost XL front camera has a 128GB card and a reported battery life of eight hours. The two-minute clips are about 300mb in size, so it holds about 425 of those or just over 14 hours’ footage. Again, on dashcam setting, the oldest clips on the card are overwritten when it fills up.

This camera films in 1080 HDR which gives clear enough footage in most lights to show the registration plate of a fast close pass or even a car on the other side of the road. It mounts on the side of the helmet, on an adhesive clip system and can also be mounted over or under the handlebars using an adaptor.

A modern Go-Pro camera, for example, may only have battery life of 1-1.5 hours, but will give very good quality, smooth, stabilised footage. Some have built-in batteries, whereas you can carry spare spare batteries for others. Popular camera makers include Apeman or SJCAM, and the Techalogic camera has lenses to the front and to the rear and is designed for helmet mounting, recording in two directions simultaneously. The more costly Insta 360 sits on top of the helmet and provides a 360 degree recording from nearly all angles, which can be edited to pick the best shots after the event. Chill-Tech produce ‘bullet’ style cameras which sit nicely on the helmet or mount on the bars.

The options for helmet-mounting a Go-Pro are somewhat awkward, to my eye. The mounts are usually on top of the helmet and rather prominent and I do have a concern about what might happen in a collision. They do very well slung over or under the handlebars, or under the saddle, or on the seatpost though. Pannier racks can also be useful places to mount a rear-facing camera. Myriad aftermarket mounts are available at modest cost for this popular style of camera.

CEX, more widely known as a store which trades in used video games, also trades in used action cameras and provides a 24-month warranty – in some cases a longer warranty than the original manufacturer.

Cameras can be mounted on a chest-harness, or rearward facing on the handlebars. The options are legion and it is a matter of experimentation and personal preferences, varying from ride to ride, as to which is most suitable. Whether a camera prominently displayed on the helmet provides a visual deterrent to reckless drivers is unknown, given that many simply aren’t paying enough attention to notice the cyclist at all in the first place.