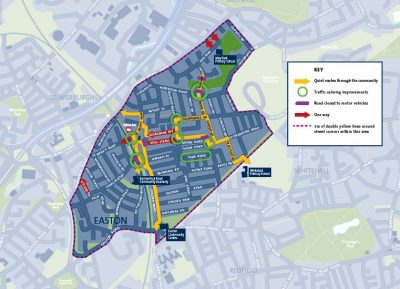 There is a key decision point on Friday 10th Nov for Easton Safer Streets. Please show your support using the button below. This is Bristol’s first attempt to make a big difference to the vitality of an area by a joined up approach to through traffic (rat-running), rather than a piecemeal street by street approach. Of all the projects in the Cycling Ambition Fund package this is the one with the greatest potential to benefit whole communities, and offers a model for other areas. It continued after local councillors backed down on rat run measures in Windmill Hill Deterring through traffic in Windmill Hill.

There has been a very extensive and detailed ‘co-design’ process involving hundreds of people and dozens of events and meetings, lead by Sustrans. The final design proposals are being considered on Friday 10 November 2017 by the six councillors of the Easton, Eastville and Lawrence Hill wards to decide whether to move on the next stage of formal consultation.

As with all such proposals there is a vigorous lobby against change. We are encouraging everyone who lives in the area, or is affected by the changes, or who would like safer streets in their area, to contact the key six councillors to show their support. We’ve made it easy for you with this button which will open an email with all the info ready for you to add any comments.

As well as proper protected cycleways and traffic free routes, it’s important that our neighbourhoods become better for walking and cycling. This is one of the six key elements of our Space for Cycling campaign. The citywide implementing of 20mph areas, and steps to manage parking through RPS, have been big steps forward. But reducing through traffic and rat-running in our residential streets will improve life for all. It’s important to remember that this is NOT about stopping use of cars as access is maintained for motor vehicles.

In London there are now three large ‘mini-Holland’ schemes that have been intensely controversial but are now being held as major rejuvenating and business friendly successes. While we are concerned at the rather limited nature of the outcome of the Sustrans lead ‘co-design’ process but it is still worthy of support. There is sound research evidence to back the benefits and impacts of pedestrian improvements and road closures as set out in the new website from the UWE Centre for Transport and Society. Civic leaders also need to understand the lessons from Bristol about the importance of showing leadership The Reclaiming of Queen Square – lessons for ‘metro’ Mayor Tim Bowles.

The six councillors are as follows, and you can read their full statements in response to the Bristol Cycling Manifesto for councillors from 2016 by clicking on the ward links, below are extracts.

Afzal Shah (Easton): no statement of support for Space for Cycling

Ruth Pickersgill (Easton): “I support a transport plan for the ward and a more rigorous enforcing of parking restrictions and speed limits and increased provision of cycle stores, traffic calming measures and supporting new plans for developing ‘streets for all’ through community consultation.”

Mahmadur Khan (Eastville): “I understand and support your cause.  If I am re-elected, I will do all I can.”

Mhairi Threlfall (Eastville, Cabinet Member for Transport): “While some plans may be controversial, we are determined encourage more people to get on their bikes, and provide a safer more pleasant public realm. This means we work tirelessly to make cycling more accessible and safer for people of all ages and abilities.”

Margaret Hickman (Lawrence Hill): “Some plans may be controversial but encouraging more people to cycle safely must be a priority.”

Hibaq Jama (Lawrence Hill): no statement of support for Space for Cycling

One thought on “Easton Safer Streets – ask councillors to support”