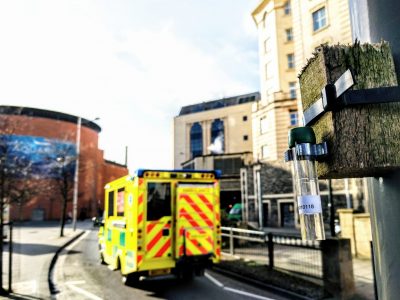 On this website we previously covered the excellent BBC documentary Fighting For Air. At the end of the programme, viewers were informed they could use an air quality postcode checker, enabling anyone in the UK to see how their area faired on a simple scale of 1 – 6. However, we delved into this for some areas of Bristol already covered by local council monitoring and were not convinced by the results.

The checker considers only one of the 9 standards that apply to these 5 pollutants. This is the NO2 annual average, on a scale of 1 – 6. Where 6 is equal to an annual average NO2 concentration of 100µg/m3 or greater. This is slightly bizarre as any residential façade that exceeds 40µg/m3 is in breach of EU law.

Bristol Council has one of the most detailed and easy to use information maps of any council in the UK. One layer of this map is NO2 monitoring data from the diffusion tube network around the city. These are small tubes attached to lampposts, which record monthly average concentrations, which are then averaged over a year and verified by Defra. Comparing some of these results with the postcode checker gives some surprising results, shown in the table below: 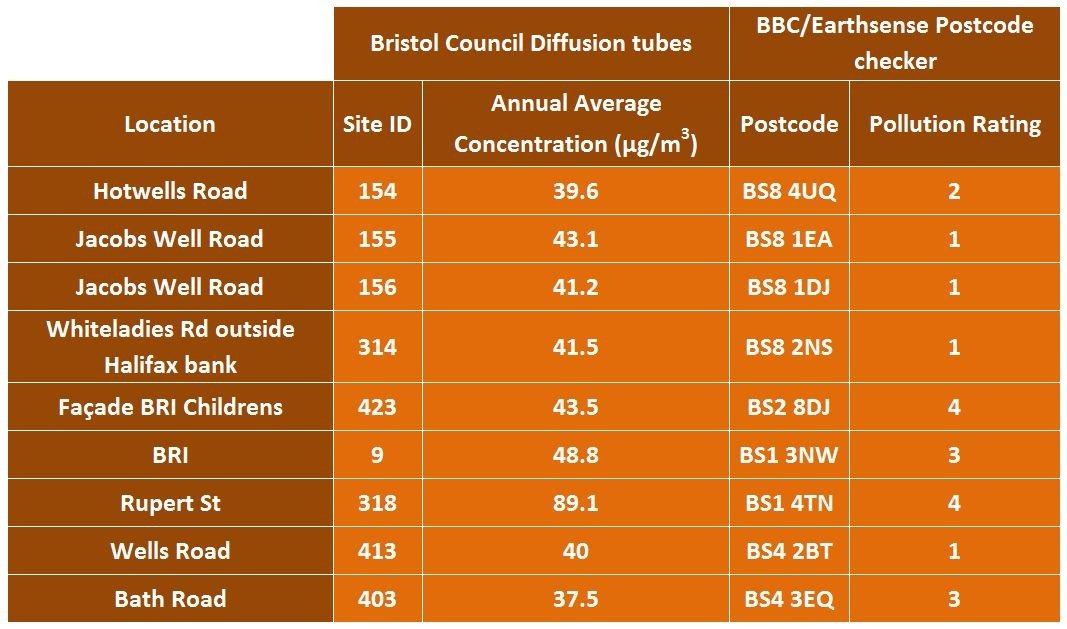 The road featured in the documentary had an annual average NO2 of just over 40µg/m3. As mentioned, this is the legal threshold that applies at the windows of people’s houses. This level was clearly deemed necessary for action in the programme, yet some Bristol Streets with the same result are deemed to have “Good” air quality – a rating of only 1 out of 6.

Overall, the checker does not correlate with Bristol Councils monitoring results and it only refers to one of a host of pollutants that are part of the problem in Bristol.

Scientists knowledge of the impact of Air Pollution has on health is still in its infancy. Monitoring sites are few and far between and the technology for undertaking this is lacking. To pretend we have enough information to provide the public with a ‘one score’ ranking is misleading and hugely damaging to efforts of organisations such as Bristol Cycling, who are trying hard to raise awareness of the potential dangers of the current situation. It is also at odds with the precautionary principle.

We would point anyone in Bristol who wants an understanding of NO2 outside their house, to visit the council map mentioned above and select an Air Quality monitoring site on a road with similar traffic flows to theirs. Other pollutants can only be guessed at as monitoring is almost non existent.

A summary of the National Air Quality Objectives (NAQOs) that apply to Bristol:

Bristol, is one of the largest Air Quality Management Areas (AQMAs) in the UK, for Nitrogen Dioxide (NO2) and Particulate Matter <10µm (PM10). This means across the city pollutant concentrations of these have been breaching the National Air Quality Objectives (NAQOs), which are the government/EU target “safe” figures, across the city. These objectives  cover 14 different pollutants. Of these, 6 apply to Bristol. These are listed here.