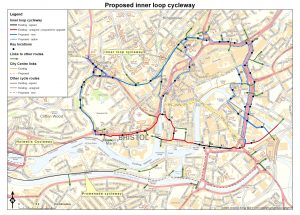 The Bristol Cycling Campaign is putting together a proposal to City Hall for a segregated loop around the city centre. The Inner Loop Cycleway will link the new and established radial routes and help cyclists safely negotiate the ‘tarmac collar’ of the city’s motor traffic dominated Inner Ring Road. There’s a map and key here.

The proposed route will be designed to the Dutch standard, sections of it already exist through earlier developments. What follows is a summary of our proposal.

Bristol has made good progress with its Cycle Greenways radiating out from the inner city towards the outer suburbs and the countryside – the first and still the most successful being the Bristol & Bath railway path. There are now half a dozen such radial leisure and commuter Greenways, all shared by cyclists and pedestrians. These are paralleled by additional signed cycle routes following approximately the main motor traffic roads. In addition, most of Bristol’s radial main roads have partial cycle lanes as a result especially of the Greater Bristol Bus Network programme.

These routes however, are not tied together as they approach, enter and cross the city centre. This crucial and focal gap in the cycleway and cycle route network presents itself as a problem in at least two ways. The city’s cycle routes are not perceived by the public as offering a network – rather, a set of isolated one-off routes. The city centre and its approaches are perceived by aspirant cyclists as a hazard, given the heavy traffic and factually poor record of incidents involving injury.

Arguably, the locus of the problem is not the city centre itself – which has a number of quiet routes and an increasing number of contraflow cycle lanes on one-way streets. Worse is the difficulty of connecting between cycleways and of crossing the Inner Ring Road. Particularly difficult for cyclists are the main river bridges and high-capacity roads including Temple Way, Bond St, Lewen’s Mead and the Centre itself. The approaches to Clifton and the Triangle experience similar problems.

An excellent opportunity has now arisen enabling a comprehensive solution. Put simply, it is an Inner Loop Cycleway paralleling the main Inner Ring Road and linking together all the radial Greenways and cycle routes. The opportunity arises because of the planned Bus Raid Transit (BRT) city centre loop (the bit we have fewer concerns with – Ed). This will be a bus priority route following this approximate alignment. Investment in cycleway infrastructure could and should parallel this public transport infrastructure improvement.

The BRT city centre loop plans at present make no concession to cyclists and is also actively removing some cycling infrastructure on Temple Way. It is therefore legitimate to request these plans be modified to include a measure of remedial treatment for cycling. These modifications and associated cycling investment legitimately could be made within the BRT budget.

This proposed investment should follow current Dutch-style ‘best practice’, as outlined at the national cycle infrastructure conference organised by the City Council in October 2012.

This practice involves creating segregated cycleways parallel to main traffic roads where these are also main cyclist desire lines. This situation reflects the BRT city centre loop alignment. Such cycleways should wherever possible be separate from pedestrian footways and may be one- or two-way. The route should be continuous around the city centre. Importantly, it should connect directly with each incoming radial Greenway and cycle-route.

To be useful, the Inner Loop Cycleway must be visible. It should therefore be surface- marked with cycle pictogram every 40 metres and be allocated a distinctive colour stripe to put beside each pictogram. Where the Inner Loop crosses another cycle-route, cyclist signposts may be appropriate. The Inner Loop itself should also be named, should appear on cycling maps and should be marketed and publicised in the local media when it is opened.

Some sections of the Inner Loop might be thought already to exist in something almost approaching a serviceable final form: possibly including Queen Square, and Nelson Street. However, it may be considered that the Inner Loop would benefit considerably by the creation wherever possible of segregated cycleways in these sections, in order to reduce conflict with the heavy peak pedestrian flows.

Other sections are already in initial planning stage within the Council – notably the Brunel Mile section along Portwall – and will have their own extant programme. We are already working on the detail of the design and any of you who would like to contribute to this are welcome to join our Infrastructure Action Group, which meets regularly (contact Secretary, p14).

A first draft report into the full Bristol Inner Loop Cycleway should be ready by summer 2013, although details can be brought forward as the need exists.

If the Council accepts that the Inner Loop should be built as an essential component of the BRT city centre loop, then its construction timing will necessarily be led by that BRT programme, unless a cycling infrastructure budget can be brought into alignment with it.

This article was first published in the Winter 2003 edition of the Bristol Cyclist.

What needs to be done to make the Inner Loop Cycleway a reality?