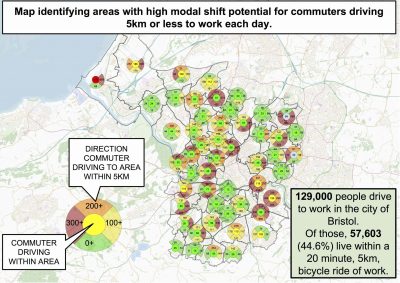 It’s worth pausing to let that sink in. Nearly half of Bristol commuter drivers live within a 20 minute bicycle ride to work.

Adam Reynolds of CycleBath has emerged from sitting in a dark room with a wet towel round his head with a very practical illustration of Bristol traffic flows that won a recent Hackathon. The centre of each circle shows the number of commuters living in the ward and driving to work in the ward. It also indicates the number of commuters driving to the ward for work, from 5km or less away and the direction they are coming from.

So green circles imply that not many cars are coming to the ward, but an adjacent ward with a red sector indicates that there are a lot of those cars driving from the green ward into that ward, or from that direction, so there is high potential modal shift. 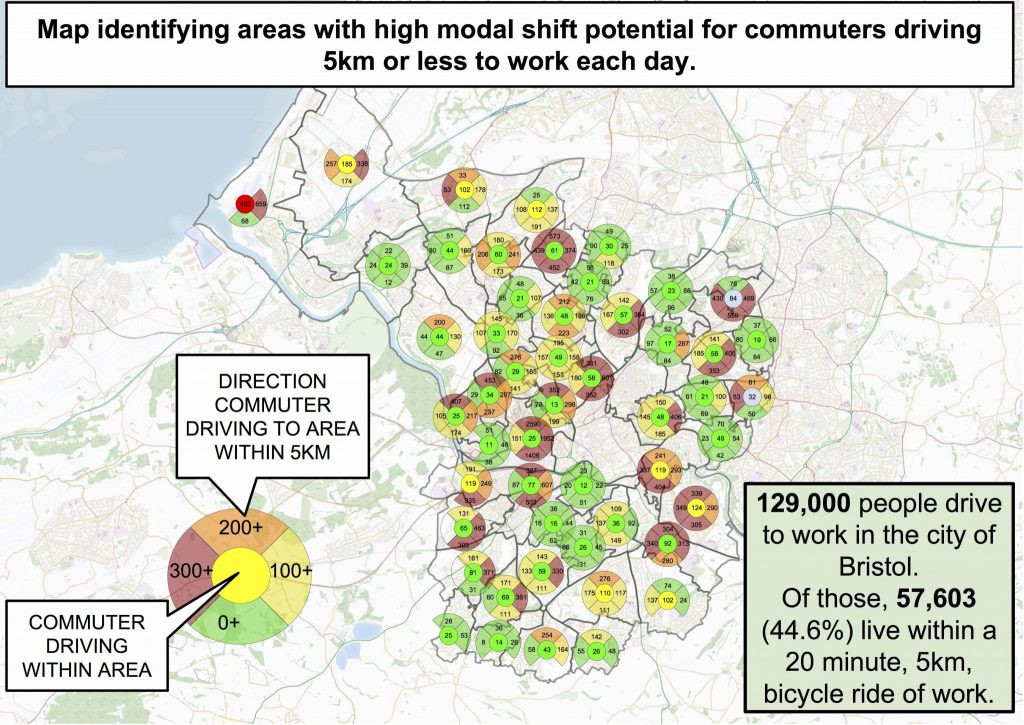 The key importance of the centre is clear, but have a look at Avonmouth! Also Brislington, Fishponds and Horfield. The circles for South Gloucestershire wards will be interesting, but not perhaps surprising.

This overall perspective is complementary to the astonishing detail in the DfT funded Propensity to Cycle Tool, pct.bike/avon. Try the following settings for an overview, and then look at the pressure on Gloucester Road North and around Filton. Geography: Lower super output area. Scenario: ebikes. Cycling flow: Route network. Show zones: untick. Map base: black & white.

With cycling commuting levels approaching 15%, all future investment must be aimed at ‘Interested but Concerned’ cyclists. Anything less than attractive, welcoming and comfortable end to end routes simply won’t be good enough. And of course ‘Triple A’ standard, for All Ages and Abilities.

It’s time to get serious about cycling as a strategically important mass transport mode in the region. We’re calling on the new WECA Mayor, Tim Bowles (aka ‘Metro Mayor’ but the preferred term is ‘West of England Combined Authority’), and Bristol Mayor, Marvin Rees, through his Congestion Task Force, to step up to the challenge. The demand is there, it’s their job to remove the barriers and enable people do the right thing, for themselves and for the city.