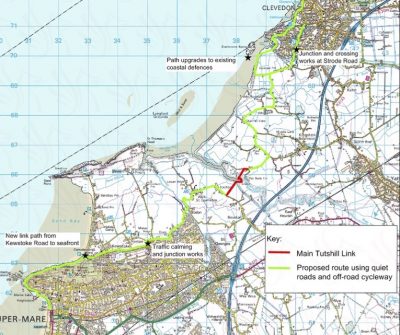 We are very pleased that planning permission has been given to the missing link on the Clevedon & Weston cycle route. We strongly supported the application, as below, and the original 2012 one (Clevedon & Weston Cycle Route). It can be discouraging that things take so long, but good when progress is made.

Note however that this proposal involves sharing the route with cattle, which is a big issue on the Festival Way. See below for three proposals from BCyC member David Neale to avoid this.

Link to the planning application

Bristol Cycling Campaign strongly supports this planning application. We would particularly emphasize the following advantages of the proposed scheme:

Using the proposed new link, the distance between the edge of Weston and the edge of Clevedon will be about 5 miles, the shortest route being flat and mainly along traffic-free paths and quiet lanes. This will be within the capabilities of a wide range of potential cyclists. Currently the shortest available route is nearly twice that distance and includes a section of  A370 with fast-moving traffic. Only a tiny minority of potential cyclists would be willing to ride the existing route. Therefore the new link will make cycling to work or college (or for other necessary journeys) between Clevedon and Weston a practicable possibility for many more people. Enabling and encouraging people to cycle these journeys is in the public interest, as it reduces congestion and pollution, and improves public health. It will also open up job opportunities in Clevedon for people in deprived parts of Weston for whom the bicycle may be their only transport option at certain times of day/night (e.g. shift workers).

The route also has significant tourist potential. Many cycling groups in the “West of England” region (including Bristol Cycling Campaign) organise cycle rides to places of interest. The availability of the new link will significantly increase the likelihood that such rides will visit Clevedon and Weston, providing extra trade for businesses in these towns. Such rides would normally start from Bristol or from a railway station, and therefore no parking would be needed at either end of the proposed new section of cycle path. More generally, it cannot be emphasised too strongly that the vast majority of potential users of the new cycle path will want to use it as part of a longer bike ride and therefore the shortage of car parking at each end of the proposed new path is unlikely to cause any significant problems (and concerns which have been expressed about this are greatly exaggerated).

We therefore strongly urge the Planning and Regulatory committee to approve this planning application in their meeting next week.

For the future we suggest that North Somerset Council should aim to extend the cycle path in each direction, either along further sections of the disused railway, or alongside the proposed national coast path, or ideally both. This would further shorten the distance for people who need to travel between Clevedon and Weston, as well as opening up the route to an even wider range of potential users.

This is the supplementary proposal (full plans here Weston-Clevedon Options from David Neale 2018):

As I’m sure you know, planning permission has been granted for the difficult “Tutshill” section of the Weston – Clevedon proposed cycle route (Application 18/P/4758/FUL). It so happens that I devised the route for Sustrans in 2002 as part of their North Somerset Cycle Review for the Council. Of course, I wrote in support of the application but with the recommendation that  the travelling public should not share farm tracks with cattle. I have come to this conclusion as a result of the South Bristol Link Road project where a very good parallel shared cycle path connects to the Festival Way in Long Ashton via a farm track and farm access bridge over the Bypass, both of which are filthy in wet weather. To make matters worse the Council insists, on behalf of the farmer, that cyclists dismount and walk through the filth. I understand the reason for this and regret now that I did not identify the problem at the planning stage. Parsonage Farm has about 40 cows who walk this route four times each day. The Tutshill route is through Yeo Bank Farm that has 600+ cattle using long sections of the farm track / proposed cycle route when they are put out to graze.

Having originally devised this route, I now realise I’m ‘hoisted by my own petard’. I’ve worked hard to find cow-free solutions to the problem and hope my three outline schemes will help the Council choose an excellent connection between the Weston-super-Mare / Wick St Lawrence cycle network and the country lanes of Kingston Seymour.