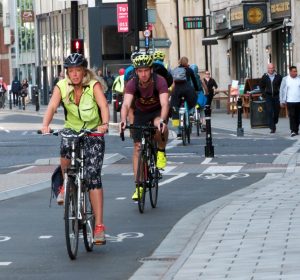 Today, the government made its long-awaited funding announcement for tranche 2 of the Emergency Active Travel Fund. The first tranche was a relatively small amount of money for Bristol, thanks to the formula used by the government, which prioritised areas with high public transport usage. Nevertheless, this first round of funding delivered the “pop up” cycle lanes on Park Row, Lewins Mead, Mina Road, Counterslip & Clifton Triangle, as well as extra pavement space for pedestrians to enable social distancing.

In tranche 2, the West of England Combined Authority (WECA) has been given its full allocation of £2,964,000, which will be divided amongst the three local authorities. WECA also allocated a further £10,000,000 to active travel back in June following our call for more support, but we have yet to hear how or when this will be spent.

In their bid for this tranche 2 funding, Bristol City Council have proposed making permanent the existing “pop up” lanes with higher quality materials – we hope this also means resurfacing – as well as introducing more. The additional separated lanes are proposed on Victoria Street, Nelson Street and Stokes Croft. On top of that, there are a number of point closures across the city which should open up some quiet cycle routes and create pleasant environments on residential streets and local high streets. Some of these could form the basis of new liveable neighbourhoods. We’ve plotted the schemes on a map and you can also see which streets are included in the initial proposals, please click here.

Since the tranche 1 funding was announced, we’ve been working closely with council officers to try and ensure the routes are high quality and feedback from our supporters is incorporated. While it’s good that in many cases the road space has been reallocated in favour of active travel, some of the routes are still implemented to a sub-par standard. We look forward to working with the council to help them turn these spaces into high quality, safe cycle routes, suitable for anybody to use.

To find out more please join our meeting on the 1st December at 19:15pm.