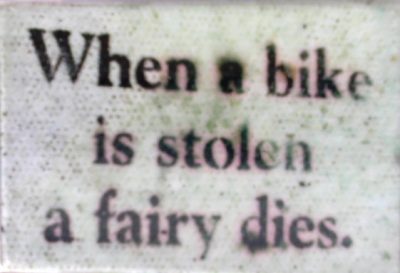 Such a sad tale of a stolen bike from new Bristol news site, BristolWorld.com. We were able to share some information and advice, including What to do if your bike is stolen and Why Bristol needs more bike hangars

Here are a couple of quotes from the article.

It wasn’t even a very good bicycle.

Bought eight years ago on the Government’s cycle to work scheme, I’d run it into the ground, to the point I was warned it was no longer safe to ride when taking it for a puncture repair at Halfords, writes BristolWorld editor Alex Ross.

But on Saturday morning, after discovering the bike – a grey Specialized Allez model – had been stolen from outside my home, I felt strangely quite upset. Someone had targeted my property, they had targeted me.

And so, in an instant, we both became part of what I have discovered was a very large group of bicycle theft victims in the city.

Home Office figures covering the 12 months up to March this year showed there were 1,694 bicycle thefts reported to Avon and Somerset Police.

That is the equivalent of almost five bike thefts each day – and that being over a period with two lockdowns which saw many people cut back on transport, and stay at home.