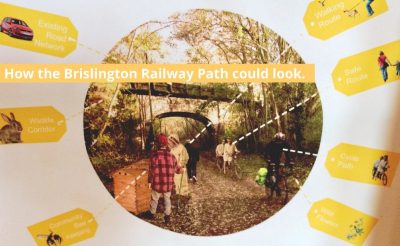 How many people know about the old Brislington Railway line, which runs from Sainsbury’s on Whitby Road to Tesco on Callington Road? It’s is currently derelict and unused. Bristol Cycling Campaign have been contacted by Brislington residents who think it would be a great idea to turn it into a cycle route! If you agree please sign their petition: https://brislingtonrailwaypath.weebly.com/

They are concerned about City Council and West of England Combined Authority intentions for this land as using it as a relief or link road are on the agenda: https://www.jointplanningwofe.org.uk/consult.ti/JTSTransportVision

Think of the Bristol to Bath Rail Path. That’s a great cycle route, a nature corridor and a lung for our city. Could we have a similar Brislington Rail Path? This would provide a safe an attractive route into the centre of Bristol. It would form a missing link between the River Avon Path, which could be easily upgraded, and the Whitchurch Rail Path.

Currently getting from one to the other involves cycling over the busy A4 at Arnos Manor and negotiating Talbot Road and Hampstead Road, which are notorious rat runs during rush hour. This does not encourage families with children, or novice cyclists, to take to their bikes. It could also be a green amenity, and a linear park, for the local community. Of course, providing an alternative route to motoring will relieve congestion.

The Brislington Tramway proposal was a Bristol Cycling Campaign ask for Brislington West in the 2016 Council elections. The campaign, by some of our local members, has our full support.