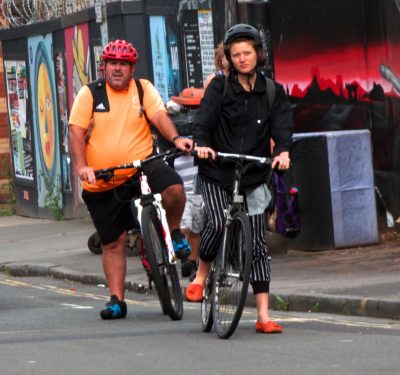 Cycling has seen an explosion in popularity during the lockdown period as empty roads, cleaner air, and more spare time for some have opened up new possibilities. However, for some people, cycling remains closed off by barriers such as cost and accessibility.

Bristol Cycling volunteer James Ward recently sat down with Brock Horning, a social media expert who oversees the #BristoliansOnBikes page, to discuss cycling, people’s perception of cycling, and how to overcome the barriers that people face to using more active transport.

JW Tell us a bit about #BristoliansOnBikes and how the idea got started.

BH #BristoliansOnBikes is a project shared through the Bristol Cycling Instagram page where we invite cyclists from all walks of life around Bristol to share their stories of cycling, what they enjoy about it and so on, along with a picture.

The idea came from a conversation I had with Tom [Swithinbank] and a mutual friend about how we could engage the wider public with cycling and with BCyC. We liked the idea of an Instagram page, and when the coronavirus pandemic began and I was furloughed, I decided to dedicate my new-found spare time to the project. Thus #BristoliansOnBikes was born!

JW What inspired #BristoliansOnBikes, and what motivated you to start it?

BH In our conversation, we were inspired by projects like Humans of New York to create something that resonates emotionally with people, whether cyclists, walkers or anything else, to promote cycling and active transport.

There are loads of reasons to get into cycling, but something my wife says always sticks with me. She says that when you cycle you feel like part of a community. The idea of #BristoliansOnBikes is to show the diversity of the cycling community in Bristol and highlight the opportunities that are available for cycling in Bristol.

JW In #BristoliansOnBikes you’re trying to capture an image of cyclists in their diversity. Do you think that cycling has an image problem?

BH Cycling definitely has an image problem. Even the word “cyclist” carries negative connotations for a lot of people who maybe see cycling as an elitist hobby.

And I agree that it can be off-putting to see groups of cyclists speeding past on expensive bikes, wearing all the fancy gear. But the reality is that the vast majority of cyclists, regardless of what they look like or what bike they ride, are really friendly and full of great advice.

#BristoliansOnBikes is about challenging the mainstream perception of cyclists and demonstrating the full diversity of our local cycling community.

If I have one goal with #BristoliansOnBikes it is to reach a point where no one who wants to cycle is put off by feeling that it isn’t for them. Cycling is and can be for everyone.

JW Have any of the stories particularly caught your attention so far?

BH There was a story from a pregnant woman who thought that she was going to have to stop cycling to work as her pregnancy progressed. She was worried that the bus would take longer and wouldn’t give her the exercise that cycling did. But thanks to an e-bike she was able to continue to cycle to work much longer into her pregnancy.

This goes to show that through new technology and innovation we can get more people onto bikes, even those who thought it impossible.

There was also a story of a man who had planned to cycle from Land’s End to John O’ Groats this summer, but due to Covid-19 had to cancel. Instead, he cycled the equivalent distance around his neighbourhood, all to raise money for the Bristol NHS Foundation.

JW What do you think are the barriers to greater uptake of active transport in Bristol?

BH I’ve spoken already about the need to overcome the “cycling’s not for me” barrier. Besides this there are obvious practical barriers to cycling, of which safety is number one. This could be improved by installing new and better cycling infrastructure across the city, and making sure it’s connected. At the moment, cycling lanes are often disjoint, meaning that you cycle for five minutes on a separated cycle path, only for that to end, forcing you onto a busy road, or through a junction, before the next cycle path starts.

Another barrier can be the cost of a bike. There are some great schemes around that can be really helpful, such as Cycle to Work, and Bristol Bike Project and Life Cycle are doing brilliant work to get second hand bikes to those in need. I’d like to see these schemes and others advertised more.

JW What would you say to someone to convince them to start cycling, or to cycle more?

BH I’ve already mentioned the sense of community, which is how my wife tries to get me to cycle more (I’ve always been more of a walker).

Beyond that, I’d point out how cycling has been shown to be beneficial for your mental health. Even having just 15 or 30 minutes on your cycle to work to collect your thoughts and prepare for the day is really nice. Likewise, at the end of the day you can leave work behind and relax, one pedal at a time.