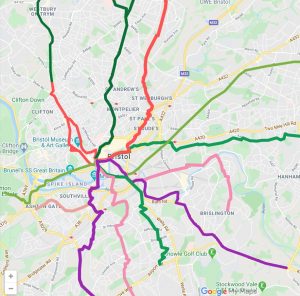 Our members will remember we asked them to respond, last month, to the West of England Combined Authority (WECA) Local Cycling and Walking Infrastructure Plan (LCWIP) Consultation. This is important as the Plan is, essentially, the game in town for cycling improvements in Bristol and the surrounding area over the next 16 years. We’ve written about the background to the LCWIP previously. Accordingly the Campaign put in a carefully considered response. We commented in detail on the proposals for a dozen or so radial routes into and out of Bristol (see map right), on the critical Central area, on design principles, and generally.

We welcome a region-wide plan for cycling improvements and called for high quality cycling infrastructure, suitable for All Ages and Abilities (AAA), across the city. Some of the proposed improvements in the LCWIP meet this high standard and we look forward to their implementation. Unfortunately, we do not believe the level of ambition is anywhere near high enough for a 16 year plan, in the face of a climate emergency. To significantly increase levels of walking and cycling and reduce accidents and injuries, a step change in infrastructure is required in the next 5 years. Instead, the LCWIP proposes modest improvements to existing cycle corridors, several key routes are omitted and tried and tested techniques for people centred neighbourhoods are ignored.

We called on WECA and the four local councils, the Plan covers South Gloucestershire, Bath and North East Somerset and North Somerset, as well as Bristol, to be ambitious and put forward plans for a world class safe walking and cycling network. The LCWIP as consulted on is simply not good enough. It was supposed to be transformative, and to include a detailed network plan, which it lacks. We ask WECA and the four Local Authorities, to implement the Plan, incorporating all our proposals and suggestions.

Please read our response and let us know what you think. Do let us know if you’d like to join us and campaign to achieve implementation to a suitable standard.