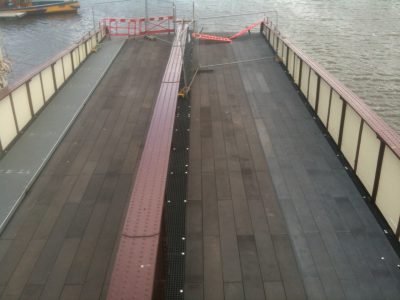 Update:   The covers are off and we can now see what the renovated bridge will be like when it opens in the next few weeks. Note that the southbound lane has the same narrow pavement as before. Northbound now has a cycleway and a footway, with a very slight height difference. It’s not clear if there will be further visual cues to separate the two.

Judging by the following response to our Prince Street Bridge petition from the Mayor’s office, it seems our concerns have been listened to and a compromise has been reached for now. Read on and let us know what you think by logging in here or commenting on Facebook.

Prince Street Bridge is one of the few direct and flat routes across the floating harbour so it is important to use this route in the best possible way. The bridge has two carriageways, which do not give enough room for three transport modes: people in cars; pedestrians, including people on foot or using wheelchairs or mobility scooters, and; people on bicycles. The bridge carries high volumes of people walking and cycling, and making them share one carriageway does not work well – both modes need their own segregated route with adequate width.

Thank you for your petition regarding Prince St Bridge.

I have previously committed to reopening Prince St Bridge to traffic to ease the pressure on the traffic network. This is important at the current time due to the number of major schemes taking place and about to take place across the central area.

There are two key schemes due to start shortly in the area that we expect to have further impacts on traffic flows in the area – Temple Circus redesign and Prince St cycle route. Both of these schemes will deliver improved pedestrian and cycling routes in the area but both schemes are also likely to have some degree of impact on existing uses, particularly Temple Circus.

Congestion in the central area has knock on effects across the city, generating high levels of air pollution, blocking other routes and causing long delays to bus routes. We are also conscious of the need to provide good facilities for pedestrians and cyclists, particularly while these works are ongoing.

We are therefore proposing to reopen the bridge to southbound traffic only, maintaining the northbound closure, while these works are ongoing. This will enable additional capacity for traffic to exit the central area while Temple Circus works are taking place and impacting the network and also facilitate the construction of the Prince St cycle route scheme. Making the bridge southbound only will also provide benefits to southbound cyclists who will be able to use the southbound side of the bridge with no delays (as was previously the case when traffic signals were in place) and without the fear of having to contend with traffic coming the other way. This in turn will reduce the pressure on the mixed pedestrian/cycle side of the bridge.

We will monitor traffic, pedestrian and cycle flows during this period. The long term use of the bridge will be reviewed following completion of these works.