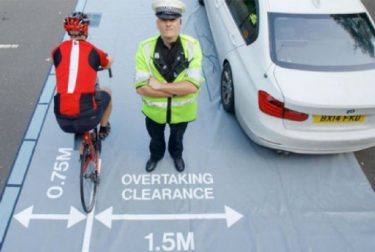 Avon & Somerset Police officers went to a seminar last week by West Midlands police on their award winning ‘Give Space, Be Safe’ initiative (Best Practice Education and Enforcement in the West Midlands). Since the initiative began last September in West Midlands it is credited with halving the number of incidents of ‘close passing’ reported by cyclists in Birmingham.

We’re very pleased to hear that the scheme is coming to our area (Undercover police WILL target Bristol drivers who pass cyclists too close). Near misses are the main issue identified as stopping people (particularly women, children and older people) from considering riding a bike. It’s an issue our Road Justice group has been working on with the police Police Near-Miss Reporting Figures to April 2016 Released.  This was also one of the key issues identified in our Manifesto for Police & Crime Commissioner Candidates at the May 2016 elections:

Low level intimidation from motor vehicles is an everyday experience for most people cycling and for many pedestrians. Two thirds of people say they consider the roads too dangerous to consider cycling due to the behaviour of traffic. In any other area of life this fear of crime and anti-social behaviour would not be tolerated. Will you ensure that policing the roads is prioritised according to its impact on the lives of most people?

In a very insightful blog post by West Midlands Police Traffic Unit they discuss the effective use of stick instead of carrot:

The only way to change driver behaviour and concentrate minds on looking out for vulnerable road users and change driving habits is through enforcement, and the resulting fear of being prosecuted. Now for those who will no doubt be spitting out their finest percolated roasted bean brew at this moment screaming “what about the cyclists !” well…….statistical analysis shows they aren’t to blame, innocent in the majority of KSI collisions it would be a waste of our time, and thus public time and money to concentrate on cyclist behaviour. The figures speak for themselves…….driver’s don’t let your prejudices get in the way of the truth…….

Top line: Most motorists are not criminals but most criminals are motorists. Intelligence-led policing following up traffic violations can be a cost-effective means of addressing other criminal activities

Now, about speeding… Essential Evidence on a page: No. 52 Is speeding a “real” anti-social behaviour?

Top line: Speeding traffic is rated as the greatest antisocial behavior in local communities. On the basis of results reported in the British Crime Survey police could argue that any enforcement programme currently operating is compatible with public concern.