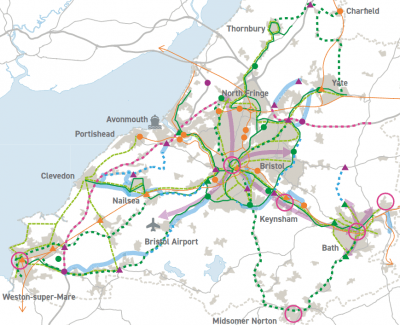 The Joint Local Transport Plan for the West of England contains plans for 10 new roads and 5 big road-widening schemes. These plans will damage the countryside, increase traffic, pollution and carbon emissions, when WECA and all four authorities have declared climate emergencies. There is some provision for public transport, and a token nod to cycling and walking, but the vast bulk of the plan and the budget is on more roads and traffic.

The JLTP includes the current version of the Local Cycling Walking Infrastructure Plan (LCWIP) with plans for 12 radial routes, some existing, some new. Otherwise it’s not so different from the March 2019 draft which we called “the sort of document which might have been written in the Sixties”

BCyC members in our Space for Cycling group are working on detailed responses and here’s the map of the routes we’ve produced to help understand the details. We’ll share this shortly. It’s no surprise that BCyC were there first with our Bristol Cycling Network in 2014.