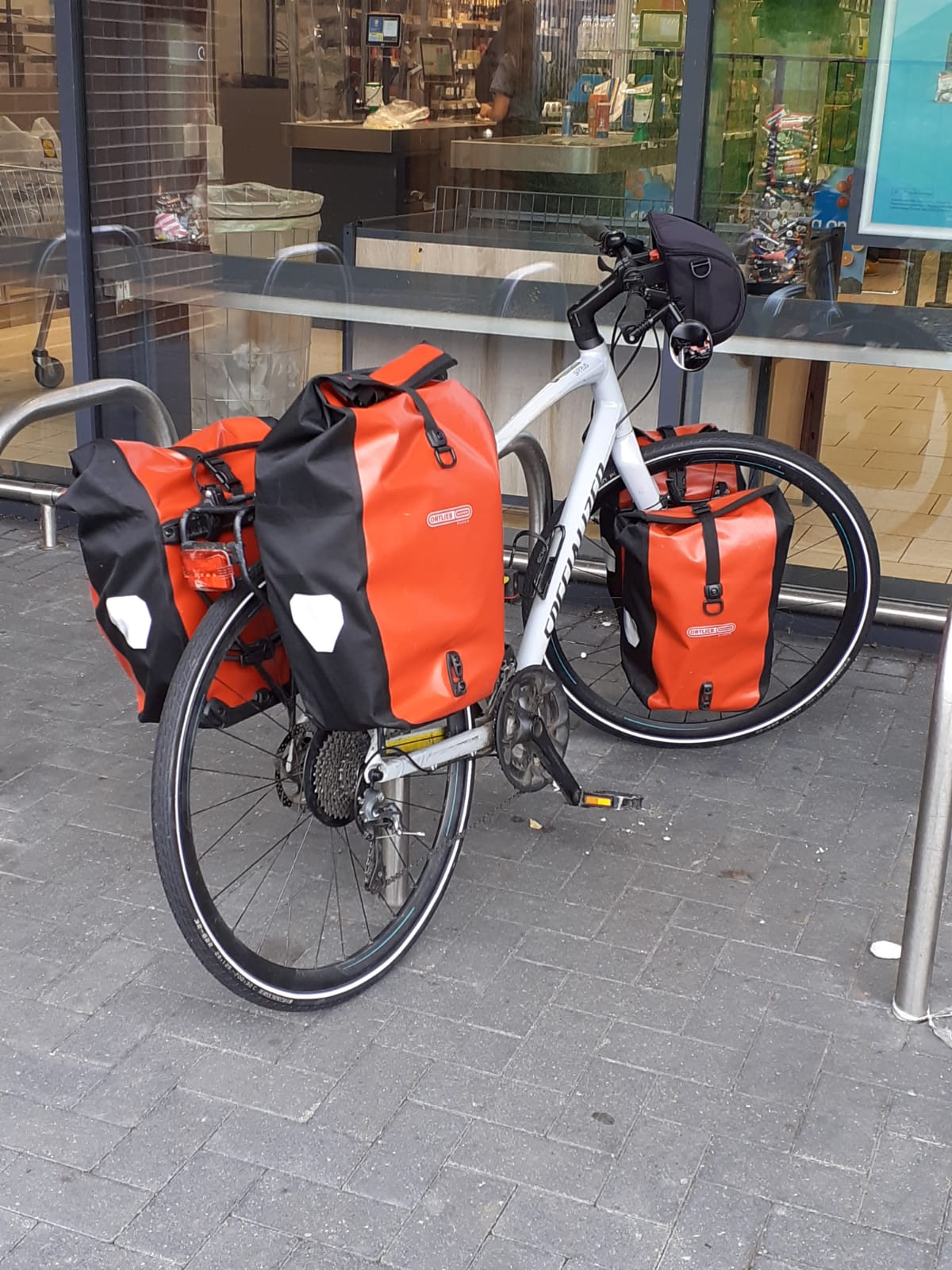 You don’t need a car to go shopping for food. A pair of panniers or a trailer can hold a lot of groceries and cycling with a weighty load is much easier than you might think. Not convinced? We spoke to five people that do most of their shopping by bike.

I shop little and often, usually on my way home from work. I have a Bagaboo workhorse messenger bag, left over from my days as a bicycle messenger. It can comfortably fit the contents of a shopping basket piled high and has multiple straps to spread the load. It actually sits on my back better when it is full and means I can use any bike to go to the shops.

If you fit shopping in with other trips (such as commuting or in place of a dedicated exercise activity) you can free up swathes of time at the weekend/evening which is invaluable. It is also great exercise. Subtract gym membership from the extra cost of shopping local and you’ll be quids in!

I haven’t owned a car for over a year and do all my main food shopping by bike for myself and my two children. I prefer to shop by bike as it’s quicker and easier to carry shopping.

In the UK cycling is seen as a sport. I have never been a sports cyclist – I use my bike like a car, a form of transport, to get around the city. It’s a 20-year old hybrid. The road surfaces in the UK are rubbish so I needed a sturdy bike with a bit of suspension. It also has a two-prong stand which is really useful when you are shopping by bike and taking the kids out on their bike seats when they were younger.

I use Dutch panniers that are permanently attached to the bike – you just drop your shopping bags into the panniers. This is how the majority of people shop in the Netherlands. It’s so much easier than carrying bulky panniers around a store.

I shop every three days and do online orders for the really bulky stuff. I tend to shop locally in Easton where I live. I don’t go to big supermarkets, they are just not geared up for cyclists. Cycle parking is awful and the infrastructure is aimed at drivers so it’s really difficult to get to a supermarket safely on your bike.

I do a big shop at a supermarket every week and I always go by bike. I take four panniers, front and back as well as a front basket and a rucksack. I am shopping for a family of five so I normally fill all those bags – that includes food for a week, about eight pints of milk, juice and the occasional bottle of wine. I put the eggs in my front basket. Using four panniers helps with balance and allows me to spread the heavy things around.

One thing that makes it all easier is that I have signed up for scanning so I can pack everything straight into the panniers. It also stops me from buying too much because I can see when the panniers are getting full. I always take a lttle rucksack in case I need to buy a few extra things.

What’s annoying is that when I return the trolley I then have to carry all the heavy panniers to my bike as there isn’t a trolley park next to the bike racks.

I also use my bike to do extra shopping locally and that includes filling two big panniers with fruit and veg from Pawsons on Gloucester Road about once a week.

I really enjoy shopping by bike, not least because I hate driving. And it’s so quick, it really doesn’t take any longer than going in the car.

I live in Stroud and shop for food about once every five days. It had been a long-term intention to cut back on the amount of driving I do so when click and collect spaces became available at a store a few miles away, I started using that and cycling there to collect my shopping.

I carry the food in a Vida XL trailer which costs about £65 on Amazon. But you can carry a surprising amount in a rucksack; and panniers, front baskets and boxes tied on the back will increase the capacity a lot.

Tom Stickland has set up a new campaign — Stroud Active — lobbying for better walking and cycling facilities in the Stroud area.

We shop by bike once or twice a week locally although we get a lot of our shopping delivered for our family of four by a fantastic social enterprise The Community Farm and by a major retailer every couple of weeks.

We go shopping by bike at our local shops in Larkhall, a brilliant little village to the east of Bath. We usually go once or twice a week and visit several shops there; farmshop, butcher’s, charity shop, deli and bookshop. We park right in the middle of the village with our cargobike.

Our cargobike has a box at the front where we can seat four children and/or carry loads of stuff. I also have panniers to go on the rear rack of my normal bike, which I also use for commuting. We also use our cargobike to go to the garden centre; we’ve brought home a pear tree and loads of other plants and compost on our bike.

You can take a lot of shopping in a pannier (or two!) on a normal bike with a rear rack — way more than you think. Panniers can take a lot of weight and once you’re riding you don’t feel the weight and it doesn’t mess much with your balance, even if you’ve only loaded up a pannier on one side. I do tend to cycle a bit slower when I’m carrying home more than 15kg of shopping though! Good panniers are usually waterproof as well and the roll top helps because you can leave them open with big items poking out.

How could shops do more to encourage customers to travel by bike?

Categories: Cycling for All, News