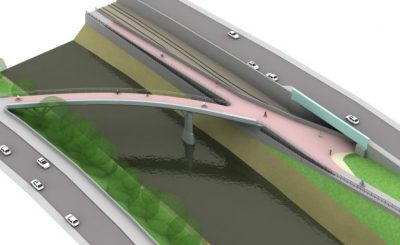 One of the more iconic cycling schemes in the city has been abandoned (here and here). The Southville Bridge was approved in 2014 and would have linked Camden Road and through to North Street in Bedminster to the Harbourside. It remains an important part of the Greater Bedminster neighbourhood cycling plan.

Costs had escalated alarmingly so Mayor George Ferguson pulled the project. The budget will be reallocated into other cycling projects and there has been agreement from DfT for an extended delivery timetable. Nevertheless, it is disappointing news that this useful link for one of the areas of the city with increasing numbers of people cycling.

This adds to an alarming number of Bristol cycling projects that have been recently cancelled after months of work, and other schemes having a major impact on cycling:

Pragmatically the redirect of funds makes sense. In principle it does not. Limited cycling money being used to shore up schemes that should have properly included cycling infrastructure from the start (we’re looking at you, Temple Quay Enterprise Zone and MetroBus, and at all the major developments). What message does it give BCC officers and others who are actively/passively working against cycling? “Continue as you are, don’t think about cycling, someone else will be swoop in and fix the mess later.”

This is what the council is proposing to redistribute funds to.

This comes at a time when it’s reported that the budget squeeze puts brakes on cycle safety pledge, while the Minister ‘hangs head in shame’ over British cycling provision, and yet George Osborne is told that investing in cycling will save £47 billion.