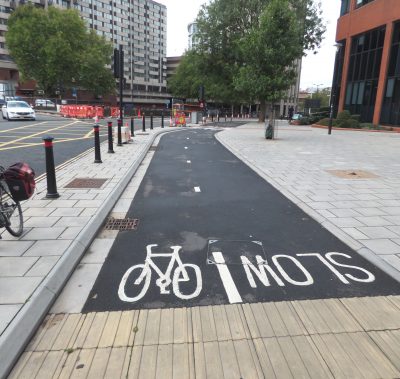 Over the last 18 months officers at WECA, Bristol City Council, BANES, South Gloucestershire and North Somerset have been developing the new Local Cycling and Walking Infrastructure plan for the West of England sub-region. Bristol Cycling Campaign has been involved throughout the process and has had regular updates on the progress of the plan. It is expected to go out to public consultation in the coming months. We will make supporters of Bristol Cycling Campaign aware when this happens and encourage you to input into the consultation. Why it matters that Bristol is preparing a ‘Local Cycling and Walking Infrastructure Plan’

The LCWIP is the first time a sub-regional cycling and walking plan has been developed and will form the basis for allocating and bidding for funding over the coming years.

There have been a number of schemes at various stages of development in the Temple Meads area so we have been keeping a close eye on this part of the city recently. Planning consent has just been granted for the student accommodation phase of University of Bristol’s Temple Quarter Enterprise Campus and another consultation has just closed on the proposed academic buildings. We have been arguing for improvements to the Cattle Market Road cycle track, improved cycle connections over Brock’s Bridge and additional cycle parking Temple Quarter Enterprise Campus – our response.

A new shared cycling and walking route on a pontoon on the Floating Harbour between Cattle Market Road and Temple Meads Ferry Landing has recently been granted planning consent. We have some concerns about the insufficient width but due to navigation requirements on the harbour there is no room for a wider route.

A mixed-use scheme has been proposed on Silverthorne Lane and we have met with developers Square Bay twice this year to discuss improving the scheme and area for people on bikes.

In the longer run it is expected that the wider St Philips Marsh area will undergo a great deal of development and we have met with officers and designers to ensure cycling is designed in at the outset (and in the LCWIP in this area).

A4018 Westbury Road to Passage Road

Subsequent to responding to the public consultation on the A4018 proposals earlier this year we have had several meetings with officers about cycling improvements along this route. The nature of the new cycling and walking route along the Downs is still being determined but we are pleased to have seen a draft design proposal for a protected cycle track along Passage Road from Crow Lane to Greystoke Avenue. We are also pressing hard for improvements along Falcondale Road to link the other two elements up Safe Cycling in NW Bristol ? Yes please.

The gradual progress of the city centre cycle network continues, with the segregated cycle track over Old Market roundabout currently on site. A new segregated cycle track will be built along Counterslip as part of the redevelopment of the old fire station site that has recently obtained planning consent. We also hope some funds from the Castle Park View will become available for construction of a protected cycle track on Castle Street and Tower Hill. We are also pushing for improvements to Redcliffe Way, where we expect a proposal to be put forward at some point in the near future. A number of other city centre routes are likely to be incorporated into the LCWIP mentioned above. Update: City Centre Cycle Network

We have been very disappointed in the new Temple Gate road changes, and the lack of good quality cycle infrastructure incorporated into this scheme. It is a great shame that the environment is still so unpleasant and unsafe for pedestrians and cyclists, faced by six lanes of motor traffic upon leaving our city’s main railway station. It has been a huge missed opportunity.

£1.1 million has been allocated for improvements to the BBRP between the city centre and Fishponds. Public consultation has just begun and we have been involved in ongoing consultation lead by Sustrans Workshops on changes to the Railway Path – have your say!.

There are many other schemes going on across the city so to keep up with what’s going on, or to get more involved, please come along to our monthly ‘Space for Cycling’ meeting on the second Thursday of the month. Details can be found on our diary page here.