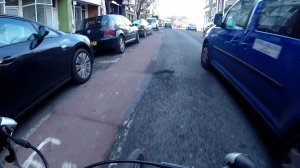 We presented the complete video of our Bristol Cycling webinar “Tackling Dangerous Driving” (on 8th October) a couple of posts back. For those who would appreciate a quick synopsis of what was said, please find here a report of the key points.

In 2019 the police recorded 318 collisions in Bristol in which cyclists were injured. These were overwhelmingly caused by drivers, yet typically in only 11% of incidents do the police take any action. Initiatives by Avon & Somerset Police (ASP) have been thin on the ground and Bristol Cycling’s Road Justice group was keen to hear from national experts and the new Head of Roads Policing at ASP as to what’s being done elsewhere, and what more should be done locally.

We invited 3 speakers, and 80+ people participated in the webinar including Kingswood MP Kerry McCarthy (Shadow Minister for Green Transport), local councillors and the Police and Crime Commissioners’ lead on National Roads Policing.

There will be a follow-up meeting to our webinar on Tuesday, 17th November at 7:15pm and all are welcome to take part. The agenda will be as follows:

Duncan Dollimore, Head of Campaigns at Cycling UK, identified some reasons why road crime is not treated as real crime and not taken seriously. As a result it’s not treated as a priority by the police. Roads policing resources have been disproportionately cut in recent years, using the excuse of austerity. Failings in the justice system mean cases are downgraded from dangerous driving (“far below standard”) to careless driving (“below standard”) to achieve quicker and more likely convictions but lower penalties. More drivers are allowed to avoid bans despite excess points on licences by pleading “exceptional circumstances”.

Roads policing is crucial to prevent many being put off cycling because they perceive the roads as dangerous. The police need to be visible in making them safer and protecting all vulnerable road users. Enforcement of the law is vital.

Police forces can do a lot to make this happen. West Midlands police have a saying “We can’t be everywhere but we may be anywhere”. Evidence clearly shows that if drivers think they might be caught then they modify their behaviour. Roads policing needs not only to be visible but also communicated widely so the public knows what is done to make roads less dangerous. Surrey police publicise their actions and appear to devote a lot more resources to the problem than they have in fact. West Midlands police use officers on bicycles to pull up bad drivers and follow through with enforcement action or education.  Their actions didn’t stem from instructions from senior command but from experienced officers wanting to make a difference.

In anticipation of mayoral, council and PCC elections next May, candidates should be asked how seriously they take roads policing and what they will do to promote it. A national government response is still awaited to a 2014 (!) consultation reviewing road traffic offences, and there is a consultation on the Highway Code with particular reference to vulnerable road users.

Amy Aeron-Thomas of Action Vision Zero (www.actionvisionzero.org) campaigns to reduce road danger and traffic harm. She reported on developments in London. Mayor Khan has adopted the “Vision Zero” strategy, which works towards zero fatal or serious road casualties. This has been signed up to by Transport for London and the Met police. A key element is the use of intelligence to identify the worst drivers and roads, and target resources accordingly.

On speed enforcement, while Avon & Somerset has a good record on camera-led enforcement, the Met is much better at officer-led enforcement. 24% of London prosecutions are in 20 mph zones, a sevenfold increase over last year (much higher than in our local area). New cameras are planned and the Met’s Road Crime Team is being expanded. Third party reporting using cameras has doubled since 2017 to 3,000 a month.  Everyone submitting evidence is told the outcome of the investigation in London.

The Met are committed to transparency and community engagement. There is an annual roads policing bulletin detailing enforcement action and an enforcement stakeholder group which includes community reps. Much of this proactive work has been led by the dynamism of the (now former) head of the Met’s road policing Andy Cox (@AndyCoxDCS).

Superintendent Simon Brickwood is the Head of Roads Policing for Avon & Somerset Police. New in post after 28 years as a career detective, he came into this role with a low level of initial knowledge. His roads policing strategy is due for review this year. Currently it is to ensure the roads of Avon and Somerset will be safe for all users. Intelligence systems allow the targeting of the causes of greatest risk.

His roads policing unit has lost capacity from 5 or 10 years ago. It sends out 40,000 letters every year on driving. There is clear evidence on the benefits of driver education. Also limited capacity in local courts. Most of the proactive policing undertaken locally is generated by national rather than local initiatives, e.g. the Xmas drink driving campaign. He is keen to work with local partners. His team is using local universities to design more effective warning letters to drivers. ASP will be deploying officers on bikes with cameras to tackle close passing.

One of the subjects provoking most debate is the submission by cyclists of head-cam footage, something he is keen to encourage. His stats show in the first 9 months of 2020 ASP received over 1,300 submissions, of which 643 led to prosecutions and 560 to warning letters. In 130 there was no further action. Although these figures represent a high level of action by the police, in only 6 of these cases did the police categorise the cyclist as a “victim” who had been caused physical, mental or emotional harm.

Sptd. Brickwood acknowledges most cyclists self-identify as victims in such circumstances. As victims they would receive regular updates on the handling of their incidents. Instead, reporting cyclists are overwhelmingly classified by the Criminal Justice Department as witnesses to offences and therefore not entitled to be informed of the outcome of any investigation*. He did not necessarily agree this classification was correct and there is an ongoing dialogue with the force. His view is if there is a clear near-miss incident you are a victim. He will help protect victims’ rights. He is completely in favour of head-cam footage and is willing to follow up any questions arising.

*Amy noted the Witness Charter requires that witnesses should receive regular updates and information about the outcome of all investigations.