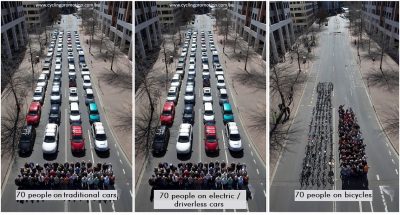 It’s no surprise to find that by far the most popular and fastest growing electric vehicle in the West of England, and globally, is ignored in a just launched survey. E-Bikes are already everywhere, whizzing up hills and making longer trips more possible. There’s a huge flowering of creativity about carrying cargo and kids. The delight and confidence boost they give to older and less confident cycle users is bringing tremendous health and wellbeing, as well as opening up mobility to nearly everyone.

Yet there is effectively NO official support for this, with all efforts remaining focussed on the hugely expensive private (electric) motor car.

It’s very important the voice is heard of those already using, or considering, an e-bike as their first EV. Please participate in the survey which will shape the future for the millions of pounds of investment which aims to “promote and increase the uptake of electric vehicles, including plug-in hybrids, across the region. OLEV’s ambition is to have virtually zero emissions on Britain’s roads by 2050.”

You may need to be a bit creative in how you interpret the questions which may some pretty shocking and biased assumptions.

A major public market research initiative has been launched to help inform the future development of the West of England region’s chargepoint network for electric vehicles. The organisations running the project want to hear views from any current user of the network – or people who would like to operate an electric vehicle in the future – on how the regions electric chargepoint network should be run, managed and supported going forward.

If you live or work in the West of England and would like to contribute your thoughts to the research, please follow this link to take part in the survey. Completing the survey should take no more than ten minutes and, upon completion, those responding will be able to enter a prize draw for a chance to win a £100 Amazon shopping voucher.