So, this is the replacement for Andrew Gillingham. The model has served London well and made a really significant change to the way cycling is viewed in the rest of the country as well.  This role is one we have been calling for since our Bristol Cycling Manifesto in 2013, and again in our Space for Cycling Manifesto for the 2016 elections. With a coming ‘metro mayor’ and sustained transport funding across 3 of the 4 local authorities maybe it time to look at this again to drive through the MetroCycle programme (if and when that emerges). 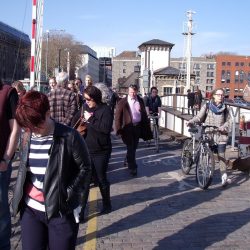 Prince Street Bridge is possible the most important single point in the city for walking and cycling. It is very heavily used and already a point of significant congestion. This will get worse as ever more people choose to walk and cycle.

It is clear that it can no longer continue to function safely and comfortably while meeting the needs of walking, cycling and motor traffic. Something has to give.

We’ve launched a petition for a one year trial of a proper design for walking and cycling. It’s been closed to motor traffic for six months so we know the city can cope.

There is a consultation on Prince Street out now to create a proper All Ages and Abilities (Triple A) route from Cumberland Road to the Centre, but it gives up at Prince St Bridge (and also doesn’t link to Gaol Ferry Bridge).

There’s a ‘plotting’ meeting for everyone who wants to make this happen on Weds 20th July, 5.45pm at Roll for the Soul. Come along!
Here’s the text of the petition

When the government wants to announce something quietly, it has several weasely methods for ensuring that the media is looking the other way. It can issue the announcement on the Friday just as Parliament is closing, it can issue it when the Prime Minister is out of the country and unable to be questioned, or it can wait for an opportune moment like a terrorist attack to distract attention. What news could possibly be so bad that it uses all three, but even worse than issuing the news when Parliament is rising, it issues it on a bank holiday weekend?…

Manifesto for Mayoral Candidates – May 2016

Threat to walking and cycling on Prince Street Bridge 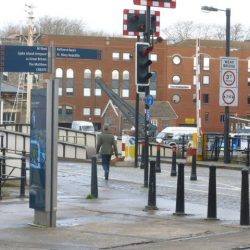 Worrying news from cabinet papers published yesterday that Prince Street Bridge, and the streets on either side, may become as congested and hostile for walking and cycling as before (which is to say ‘business as usual’ and a missed opportunity).

It is our view that this should be closed to motor vehicles so that two new iconic ‘plazas’, one at each end, can be established at the heart of the Harbouride (A Modest Proposal #3: Inner Loop Proposal). It’s plain to see that the level of use for walking and cycling, and the importance of the public space, mean that through traffic can no longer be accommodated.

The bridge has been closed for repairs since August 2015 and it’s been found the condition is worse than thought. An option was considered to “refurbish the existing bridge with a lighter deck only suitable for pedestrians and cyclists, [although] the potential cost saving is small as a percentage of the overall estimated cost of the work and [it] represents a good investment in network resilience”.

The decision has been made to return the bridge to its previous carrying capacity although the report says “this does not preclude a future policy decision on what traffic the bridge may carry if overall traffic conditions in the City were to change”.

The report says that “Prince Street Bridge forms a vital link enabling pedestrians and cyclists to cross the City Docks.”

No argument about that.

It goes on to say “It is also an important route for light vehicular traffic and the consequences of the bridge not being available for such traffic can be felt in several locations on the highway network”.  The level of use is apparently “6,000 pedestrians and 2,500 cyclists wishing to cross the City Docks at this location, along with well over 4,000 vehicles each day”.

The Bristol Road Justice Group (BRJG) has again met with the police and representatives of the Police and Crime Commissioner. The Group was set up in 2013 to promote the agenda set by CTC’s report Road Justice: The Role of the Police. Formed by local members of CTC, Bristol Cycling Campaign and Road Peace, it was joined at this meeting by Amy Aeron-Thomas from Road Peace’s national office, Kate Cooke from BCC’s Public Health Team and Ben Barker representing the recently formed Bristol Walking Alliance. The purpose of the meeting was to review progress in implementing Avon and Somerset “Policing the Roads Strategy”. The Strategy’s aims and objectives include, amongst other things, reducing road traffic casualties, especially among vulnerable road users, and reducing concerns about road safety.

These two major strategic plans will shape some profound changes to our city and towns over the coming years. The four West of England councils (Bristol, South Gloucestershire, North Somerset, Bath & North East Somerset) together are working on a draft Joint Spatial Plan setting out how the area will accomodate 85,000 new homes and growth of 20%. The companion Joint Transport Study will shape how people travel, and whether we achieve the Bristol Cycle Campaign vision of ‘a city where cycling is so easy that everyone does it’.

There’s many good words, as you’d expect they take account of the Bristol Cycle Strategy, and the Draft South Gloucestershire Cycle Strategy. Overall however we feel they’re in danger of rushing up the ‘business as usual’ path.

Our full response is here: 2016-29-01JointSpatialPlanTransportStudy.

What’s the issue?
The Bristol regional cycle network is almost entirely made up of shared space with motor traffic, or shared use with pedestrians. Both are essential and useful where appropriate, but otherwise can create conflict and anxiety about safety from more vulnerable users, whether perceived or actual. The Bristol Bike Life 2015 Report rated shared pavements and bus lanes as the least popular measures.

Concerns about safety is the major factor preventing more people cycling. A safe, direct and convenient cycle network is the key factor in making cycling so easy that everyone feels able to do it.
BCyC position
Cycling, walking and driving need different networks with specific design requirements. These may overlap and be shared in specific circumstances. While comprehensive and suitably separated networks exist for walking and driving, there is little real Space for Cycling for a city with aspirations for 20% of trips by cycles.

Is Bristol the UK’s most active city?

Bristol featured as the most active city in the UK in a new report, Active Cities – a guide for city leaders. Nine cities around the world were compared and common themes and lessons drawn out. The report, sponsored by Nike, is a useful summary of the issues and evidence and deserves to be widely used. It seems that active cities typically do four things really well. 1) They make physical activity a priority, 2) Use existing resources, 3) Design for people and 4) Create a legacy of lasting change. News article…