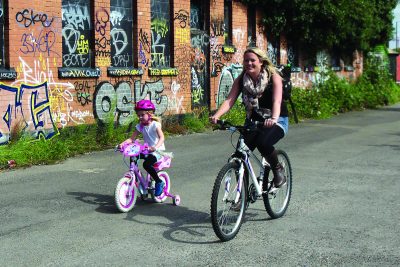 Friday 30th July was a bumper day for announcements and publications from the Department for Transport relating to cycling, to kick of its ‘Summer of Cycling and Walking’ campaign. In this article we attempt to simplify each one for you, and understand how they are relevant to us here in Bristol.

The active travel boom seen throughout the pandemic will continue to thrive thanks to a £338 million package to boost cycling and walking across the country, Transport Secretary Grant Shapps announced today (30 July 2021).

It comes after last year saw cycling rise more than in the previous 20 years put together, with the number of miles cycled on British roads rocketing by 45.7% to 5 billion.

This is the next “tranche” of the Active Travel Fund, formerly the Emergency Active Travel Fund launched at the beginning of the pandemic. This fund has seen the implementation of “pop up” cycle lanes on a number of streets around the city, as well as some point closures creating quiet streets. We’ve been quite critical of the quality of some of the infrastructure provided so far using this fund, but it does secure the road space for better quality infrastructure in the future.

Verdict: If the local councils submit good quality bids (due 8th August), this could fund some good new infrastructure in the city.

The proposed changes to the Highway Code, consulted on last year, are:

The government has published a detailed review of the consultation responses, where are overwhelmingly in support of the majority of the proposed changes. The new Highway Code will be put before parliament in September and published soon after if approved.

Verdict: The proposed changes are a real step forward for walking and cycling – as long as they are observed by drivers of course!

This time last year, the government published it’s “Gear Change” blueprint for how it would start a new active travel revolution. Alongside this was LTN 1/20, the new bible for cycle infrastructure designers and campaigners alike.

The review sets out what’s been achieved so far, how successful it has been and what’s coming next. Just a few of the interesting points are:

One quote stands out more than most:

Verdict: We were concerned that “Gear Change” could have been a one off – a headline grabber with no follow-up. However, it seems the government is keen to push on with this policy. We hope Bristol makes the most of it.

An evaluation of the effects of infrastructure implemented under this fund, which included a number of routes in Bristol.

At least 1 million car trips per year are estimated to have switched to cycle trips as a direct result of CCA-funded infrastructure. This replaced over 6 million km per year travelled by car, saving nearly 2 kilotonnes of carbon dioxide per year.

A lot to digest in this report commissioned alongside the proposed Highway Code changes, analysing how different road users behave around each other and how they feel about each other.

Cyclists voiced the most concern for their personal safety, with drivers not leaving enough space when overtaking being their biggest concern. Cyclists and horse riders who were also drivers voiced the greatest concern, perhaps due to a greater awareness of the danger’s drivers can pose.

Verdict: The report concludes that a huge and carefully considered communications campaign needs to be launched alongside the Highway Code changes, and we agree!

Public attitudes towards traffic, road use and low-traffic neighbourhoods

A research piece on how the general public really feel about low-traffic schemes and traffic in general.

Verdict: This research backs up our view that opponents to active travel schemes are generally a very vocal minority!