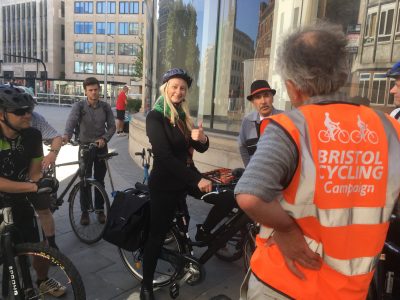 For all those campaigning for Space for Cycling, Brian Deegan is a hero, being the transport planning engineer who has delivered top quality infrastructure in London. But he says that without a ‘big gun’ cycling champion even skilled and committed council officers can’t transform our streets to make them more suitable to cyclists (and everyone), they can only deliver tinkering half-measures (The world needs more cycling champions).

Is a cycling champion of the standard of Andrew Gillingham or Chris Boardman possible in Greater Bristol? Deegan says ‘if you can’t find one then you must make one… You will never get out of the blocks without a champion.’

So where does that leave us in campaigning to make Bristol better for cycling?

We have warm words and undoubted personal commitment from Councillors, Mayor Marvin Rees and his transport lead Mhairi Threlfall, but a black hole in West of England Combined Authority Mayor Tim Bowles (and see this from Cycle Bath). But there is a consistent failure to set out an ambitious strategy, and worse, backing off from any controversy (Prince St Bridge? Easton Safer Streets? Victoria Park?).

Who would you suggest can cut through the complacency towards transformation? Or are there other changes needed?

If you want to transform your streets to make them more suitable to cyclists, then you need to get a ‘big gun’ to champion your cause, and if you can’t find one then you must make one. Otherwise, that more powerful ‘no’ up the chain becomes an insurmountable object bringing scheme progress to a grinding halt. When it comes to change it is so much easier to say ‘no’ than ‘yes’, and, let’s face it, you will never get out of the blocks without a champion.

If you don’t believe me then look at the streets. Most street layouts remain entrenched in the 1960s design standards of automobility. This represents the last time powerful people approved transformational change, albeit with ruinous results for society. Efforts to get the great others to unpick this mess are seldom met with support, and that’s why you need some superhuman help.

via The world needs more cycling champions. Do you have what it takes