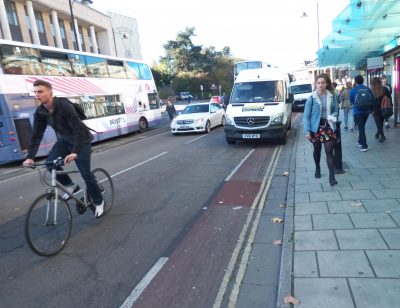 Several cycle campaigners attended including members of our Space for Cycling group.

James White spoke mainly about the MetroWest rail project, while Peter Mann covered most of the other current transport issues in Bristol. Their presentations were followed by questions from the audience.

There were three main highlights:

Both questions were accompanied by sympathetic murmerings from the audience, but neither received a convincing answer.

The two speakers mentioned cycling in passing several times and appeared to recognise its health benefits. However the significant impact which cycling could have in tackling other major problems such as congestion and air pollution was scarcely mentioned. This is quite frankly disappointing.

Want to help turn things around in Bristol? Come to a Space for Cycling forum every second Thursday of the month and see what you can do to help. Please see our What’s on page for dates and venues.