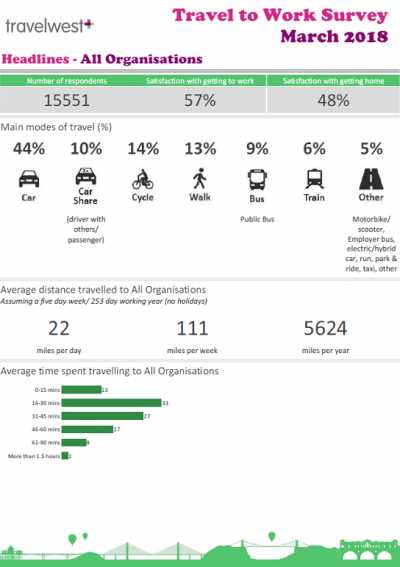 Travelwest have just released details of their latest Travel to Work survey for the West of England area and the results make for interesting reading.  Some interesting headlines are:

40% of responders traveled less than 4.9 miles, yet 29% of these journeys are undertaken by solo drivers in cars, with the biggest reason for not taking an alternative mode of transport being that it is too far to walk (13%), inflexibility of car sharing (12%), lack of perceived practical alternatives (12%) and quicker journey times (11%). Only 9% gave distance as their reason for not using a bicycle, perhaps unsurprising as 11% of the surveyed commuters lived more than 25 miles away.

People were generally more satisfied with their journey into work as opposed to the journey home. The happiest were the tiny number of runners, 85% of whom were satisfied after their run to work, followed by the 2021 who walk to work with 82% satisfied closely followed by the cyclists (74% on electric bicycles and 70% conventional). The most unsatisfied travelers were those traveling by car, train and bus with only 37%,37% and 34% respectively. Interestingly employer-run bus services received a thumbs up with 66% of travelers describing themselves as satisfied. Perhaps unsurprisingly satisfaction drops by distance traveled each day. Not commuting at all and working from home gets a 63% satisfactory rating! 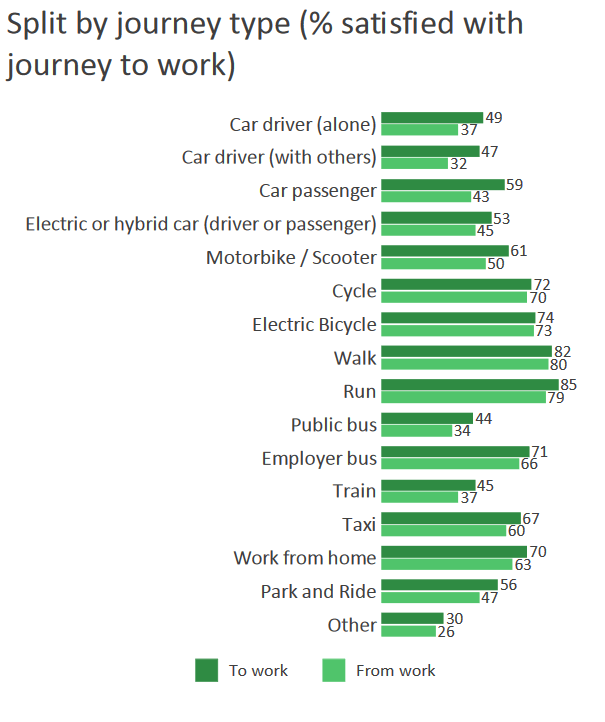 % of commuters using different modes satisfied with their journey.

The survey was an almost equal split of men and women. Women were slightly more likely than men to drive by themselves to work and 5% more likely to walk than men, however, 19% of men cycled compared with only 9% of women.

842 (5.4%) of total responders classed themselves as disabled, yet only 1% of solo drivers gave limited mobility or disability as their reason for not adopting a different mode of transport, hinting that many don’t see their limited mobility as a barrier to non car travel.

27% of solo drivers listed discounted bus and train fares as the biggest incentive to get them out of their car, implying that they perceive their car journey as a cheaper option, something discussed by Bristol Cycling a few weeks ago. 3% thought parking was affordable and only an increase would put them off. 18% blamed employers’ facilities (or lack of) and inflexible working hours as a barrier to an alternative travel choice. Car-free alternatives for business travel was cited by 15% as desirable and was given by 4% as a reason for driving to work.

Finally rounding off the survey is a chart breaking down people’s awareness of a list of schemes to assist with the transition out of their cars, such as bike and car sharing schemes. More than half of respondents hadn’t heard of Yo bike, Next bike or the Loan bike scheme.

This survey demonstrates the huge untapped potential for cycling. Commutes under 2 miles are mainly undertaken on foot, however, the majority of the easily cyclable 2 – 4.9 miles, are still being done by car, not because people think cycling is dangerous or undesirable, but because it is not the easiest option.

The full document can be found here: Travel-Survey-2018-All-Organisations

And more on Travelwest and cycling can be found here: https://travelwest.info/cycle