The planning application for the Victoria Park walking and cycling improvements closes tonight, Weds 11th Jan, but comments are still being accepted. We state again, this is good scheme utterly in keeping with everything that Victoria Park, and all other Bristol parks needs to have in a Cycling City (here’s a summary).

Thanks to all who’ve voiced their support we’ve now got a more balanced position to the fear of change being pushed by objectors. But objectors still outnumber supporters. It’s not a referendum or vote but the numbers do matter. The application has been ‘called in’ by councillors for consideration by a planning committee. This will be real test for how far Bristol can be said to be ambitious for cycling. Use this link to send them an email saying you’re in favour. We’ve done most of the work but you should include your name and address and personal comments before sending.

Email the Councillors & MP [add your name and comment]

The issue seems to come down to whether you consider the status quo to be acceptable, or even pleasant. Our position is that the current position in Bristol is intolerable. People are suffering degraded lives through inactivity, poor air quality, traffic dangers and lack of access to green spaces. The hugely positive role that can can be played by cycling is impossible when two thirds of people won’t even consider riding a bike due to fear of traffic. To say ‘I cycle and it’s no problem for me’ is just not good enough.

The narrow paths through our parks and the many barriers are acutely uncomfortable for those cycling, and for those walking. They will encourage few to consider taking up cycling. In addition when more people do cycle, and many will, without adequate facilities we can expect ever more conflict between different groups, who should have the same interests.

The Dutch have a phrase when things aren’t working properly, and when people don’t seem to behave in the ‘right’ or expected ways: “Look at what’s wrong with your infrastructure”. The key here is proper Space for Cycling. This means suitable width and design.

The proposed path has a comfortable width for walking, and 2.5m for cycling. It scores 4 out of 5 using the Cycling Environment Assessment Tool which is ‘good practice, effective and should appeal to all’ . We think all new infrastructure should have a score of 4 or more. If the width drops below 2.5m then there is a 3/5 rating ‘has value but would benefit from improvement’. A wide path will be SAFER for all users and the evidence shows that it does NOT increase speeds, just comfort. 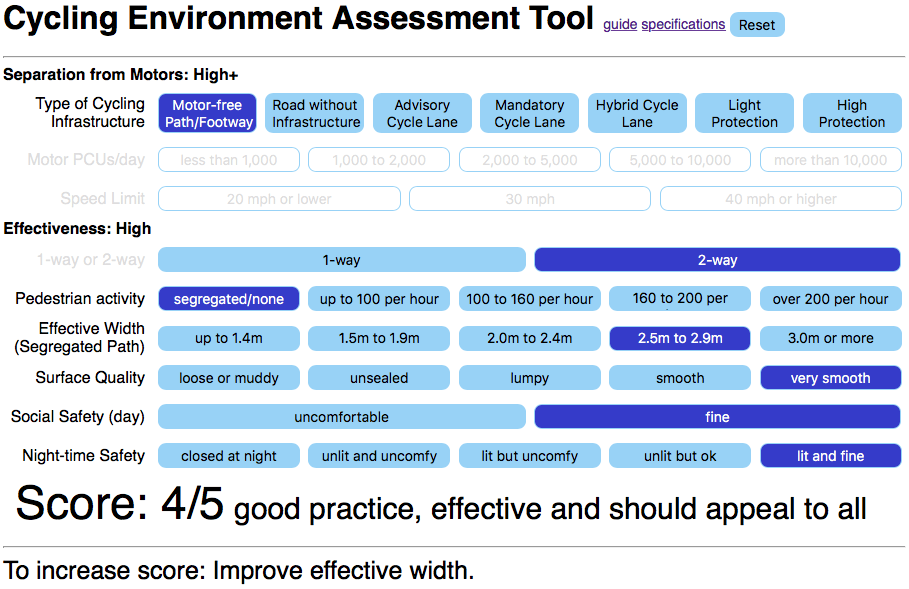 Space for Cycling – the 6 main elements 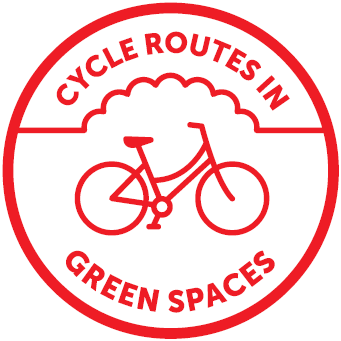 Our network of green spaces should be a fantastic local resource; pleasant and safe routes that are a joy to travel. Greenways provide some of the most appealing cycling environments, attracting groups currently under-represented among existing cyclists (for example, older people). People use them for all kinds of purposes: from commuting to work, to weekend family outings, to shopping trips. But our Greenway network is incomplete. Many planned routes have not been completed, and many gaps remain. Even some completed parts are problematic for cycling; for example, where barriers or poor surfacing exclude disabled cyclists and those carrying children. You could ask candidates to complete a local link, or to improve conditions in an existing section.