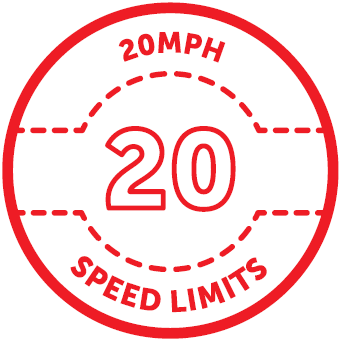 Following the success of the “Keep and extend 20mph limits” petition with over 4,000 signatures, there was a full council debate on March 15th. We put in a written submission in support BCyC Statement March2016 Keeping and extending Bristol 20mph Areas.

There was ‘shock and awe’ when the Bristol Post came out in support as well. They seemed to have been swayed by the arguments that Bristol’s Better at 20.

Here’s the text of our statement:

The Bristol Cycling Campaign calls on all Bristol Councillors to show their support for the existing 20mph maximum speed limits and their extension to all areas that would benefit. It is a key element of creating ‘Space for Cycling’.

Bristol is a densely populated city with severe road congestion. Virtually all of its streets have, or are just round the corner from, a mixture of houses, shops, schools, colleges, businesses, medical and administrative premises. Motor vehicles driven at 30 mph or more present a known and serious threat. There are on average five hospital attendances per day as a result of road traffic collisions. Pedestrians, cyclists and car occupants are the principal victims.

The 20mph speed limit is a vital safety measure with solid real-world evidence that it works on British streets. A major long-term London study (1) has shown that properly implemented 20 mph zones reduced casualty numbers by up to 40% compared with similar streets that were not limited to 20mph. The effect was strongest in the case of serious and fatal injuries to children.

Interim results from a very recent study of “sign only” 20mph schemes in Portsmouth from Road Safety GB and Department for Transport (2), suggest that where average speed was already 24mph, nothing changed when 20mph signs were put up. Where average speeds had been above 24 mph, the trend was that speeds went down. Numbers of collisions and injuries were lower across the board. The implication of this study is that to get the full benefits of lower limits, enforcement and other calming measures are needed.

In line with other surveys many of the respondents to BCyC’s 2016 survey mentioned vehicle speeds as a key factor making cycling uncomfortable. Two thirds of people are currently deterred from cycling at all. This is especially true of parents’ willingness to allow their older children to cycle to school.

Atkin (2016) Interim Evaluation of the Implementation of 20 mph Speed Limits in Portsmouth http://tinyurl.com/Portsmouth20mph

Bristol Cycling Campaign believes that every Bristolian, whatever their age or ability, deserves safe and inviting space for cycling on all Bristol’s streets and roads. We are ambitious for a future where Bristol and the surrounding areas are alive with people on bicycles, because cycling is so easy that everyone does it. Our communities will be happier, healthier, greener and more civilised.