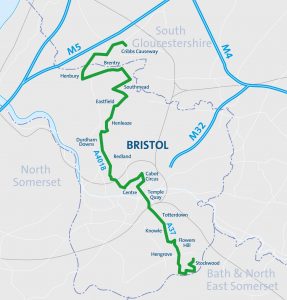 Bristol City Council have a consultation on transport on the A37 and A4018. From the south of the City it’s the route from Whitchurch via Knowle to Bath Bridges. Heading north, it’s up Park Street, along the Downs, around Westbury and eventually out to Cribbs, loosely based on the twisting journey of the number 2 bus. Unusually there are no plans or proposals, rather it’s an open ended project, involving all modes of transport; walking cycling, buses and private vehicles.

We ask all our members and supporters to complete this survey please and ask for better cycling facilities and safe space for cycling. The survey breaks the route into seven sections and there is an interactive map which you can click on to put comments. Please wherever possible simply put; “seperated / protected cycle tracks” or similar. Because of recent changes to Government Guidance for funding for transport projects, which WECA and Bristol City Council will need, there is now a good chance some seriously worthwhile cycle route proposals will be included. The more we ask for the more we are likely to get.

Because of competing requirements for space, we’re unlikely to get a continuous cycle track from Whitchurch to Cribbs, although rest assured we’ll campaign for that! But we could get it for significant sections, and other measures where there are gaps. The route is in WECA’s Local Cycling and Walking Infrastructure Plan (LCWIP). For those interested in considering this in greater detail please see our comments on the LCWIP. We’ve also put in a more detailed submission to the Consultation.