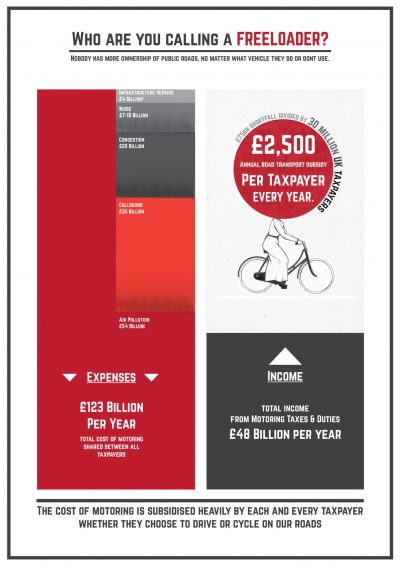 There is still an assumption that those using cycles don’t pay their way on our roads. This is despite significant progress being made in recent years highlighting the misconceptions of vehicle excise duty, often mistakenly referred to as “Road tax” (ipayroadtax.com). Remembering that 80% of cyclists are also drivers, we think it is a good time to highlight the shared costs we all pay for these stretches of tarmac that dominate our urban environment.

The headline is that every taxpayer, every year, pays a road transport subsidy of £2,500. We’ve produced a handy infographic on who pays for roads.

Vehicle Excise Duty (VED) usually called ‘car tax’, raises around ￡5.4 billion per year and is one of a number of taxes motorists end up paying, mainly on fuel, totalling approximately ￡48 billion.

This seems like a huge amount, but what do the roads actually cost?

The most obvious thing people think of is the cost of fixing tarmac. Ever noticed the groves in the inside lanes of motorways from HGVs? The heavier a vehicle is that rolls along the road the quicker it deforms and/or breaks up. Annually it is estimated the country spends ￡4 billion repairing infrastructure, although the figure to actually bring them all up to a decent standard is likely to far exceed this.

The cost of repairing damage, police investigations and hospital care can all be measured relatively straight forwardly. The cost of injury and loss of life is harder to quantify, but is estimated through the “willingness to pay” approach. This puts a cost on the loss of productivity for fatalities and injuries, and the amount people are willing to pay to avoid this. Globally road traffic collisions are the 9th leading cause of death and they cost the UK an estimated ￡35 billion every single year.

The costs of poor air quality are estimated at between ￡20 billion and ￡54 billion annually. They are felt mainly through the healthcare services. But their impact on our health is also estimated through the same willingness to pay methodology as for collisions. Research into the effects of air pollution is still in its infancy, but already a whole host of effects are known about, from increased risks of miscarriage to dementia, stunted lung growth and heart disease.

This has negative health and environment effects as with air pollution. It’s effects leads to sleep disturbance, annoyance, distraction, fatigue and the interruption of day to day communication. Associated health problems include heart attacks, strokes and dementia. It is estimated to cost us ￡7 – 10 billion annually.

Fewer vehicles on our roads would enable those who have to move around by car to do so more easily. It’s a simple fact, the only way to accommodate ever greater numbers of ever larger vehicles is either to build and widen more roads or change the vehicles we are driving, this in turn leads to greater car use, and the cycle then repeats. Do we really want even more space in our towns and cities to be given to cars? The building of the M32 into central Bristol divided communities and made their living conditions worse, leading to an increase in health and social care costs. Think of the value of the land under the M32 as extra housing or green space and the improvement in the urban environment of Easton and St Werburghs if it weren’t there.  Similarly think how much better our streets would look if they weren’t littered with parked cars. Children could take to the streets again!

Not being able to reliably get from A – B is thought to cost the country ￡20 billion every year.

Nearly all of these costs can be attributed to those using motor vehicles, but the costs are shared by us all. This is around half the total revenue from income tax, which in 2017 was estimated to be ￡241 billion.

This is the elephant in the room and not included in the above costs. One quarter of our total CO2 emissions come from Road transport. Earlier this year, a Government  a report  listed climate change as one of the greatest security threats our country faces, and yet it has barely been mentioned in the election campaign. What is the cost of failing to tackle climate change? How can we put a price on civil unrest/wars as people fight over resources? What is the price of repairing our towns and cities after increasingly frequent extreme weather events? The ultimate price we are at risk of paying is the end of the human race.

Is there another way?

Of course, road transport is essential to the economy, right? Well actually countries that didn’t follow the US model of the motor car and don’t have a lobbying car industry, such as Denmark, Switzerland, Norway and Austria have designed their cities differently. Cycling and public transport are the main means for people to get around, and their major cities are regularly voted the best cities to live in, with some of the highest standards of living in the world and easily meeting the EU Air Quality targets.

Many of these costs are estimates, but including them is essential if we are to persuade economists and balance sheet obsessed leaders to make the right decisions.

We all share our roads and no matter how we use them, we share the annual bill.

Handbook on the External Costs of Transport